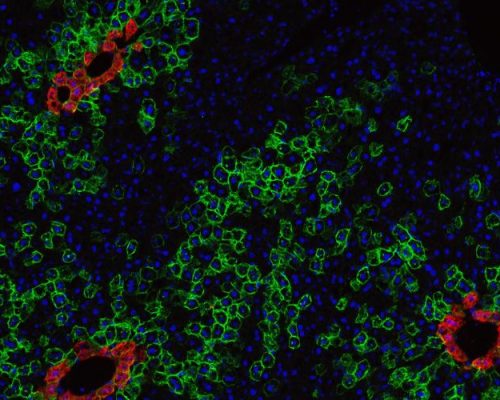 Scientists have found the origin of new cells in the liver. After years of painstaking research, scientists at the Howard Hughes Medical Institute (HHMI) have identified stem cells in the liver that give rise to functional liver cells.

Cells in the liver must constantly be replenished as cells die off, even in a healthy organ. And the new study shows how the liver has stem cells that multiply and give rise to mature cells, even in the absence of any disease or structural damage.

The lead researcher, Roel Nusse, an HHMI investigator at Stanford University, and his colleagues reported their findings in the August edition of the journal Nature.

The liver is made up highly specialized cells that carry out the liver’s various functions, including the removal of toxins, vitamins and mineral storage, metabolism of fats and sugars. As these cells die, they are replaced by healthy new liver cells. Until this study, the source of those new cells had never been identified.

Stem cells replenish their own populations and maintain the ability to develop into more specialized cells, provide new cells in the skin, blood, and other tissues where cells are naturally lost over time.

But until now, no stem cells had been found in the liver. In the past, scientists have theorized that mature liver cells might maintain their populations by dividing. But Nusse says the mature cells have become so specialized to carry out the work of the liver, they have likely lost the ability to divide.

Several years ago, Nusse’s team decided to use mice to search for stem cells in the liver. The scientists at Nusse’s lab focused on a family of proteins of called Wnts, which are key regulators of stem cell fate. To find and follow stem cells in a variety of tissues, they developed mice in which cells responding to the Wnt signal are labeled with a fluorescent protein. The scientists began by searching for fluorescently labeled Wnt-responsive cells in the livers of the engineered mice, and they finally found them grouped around the liver’s central vein.

Once they knew which cells to focus on, the scientists tracked the fluorescently labeled cells’ behavior. Over time, they noticed that the cells they were tracking divided rapidly, steadily replenishing their own population. By following the descendants of the stem cells for up to a year, the scientists discovered that these had changed, taking on the specialized features and amplified genomes of mature liver cells. Exactly fitting the description of stem cells.

The lab is now setting its aim higher to figure out if newly identified stem cells might contribute to regeneration of liver tissue after injury. They are also exploring whether liver cancers tend to originate in these replicating cells, as opposed to more mature liver cells.

Photo caption: In the image, stem cells are labeled in red and green around the central vein of the liver, and they give rise to progeny (in green) that expand across the lobule. This image is from a mouse that was lineage-traced for one year.