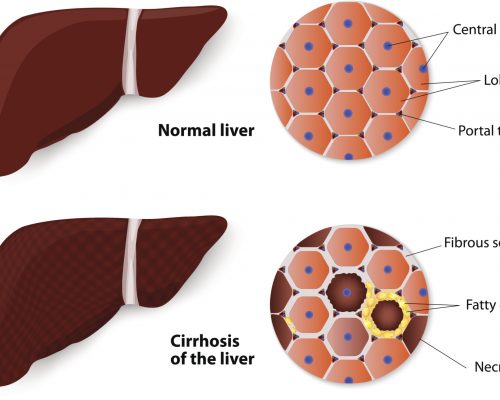 Liver fibrosis risk in premenopausal women with non-alcoholic steatohepatitis (NASH) is lowered by estrogen, according to previous research. Men are typically at a higher risk for severe liver fibrosis, compared to women pre-menopause. But this risk changes during menopause, when women’s risk increases, becoming similar to that in men.

Non-alcoholic fatty liver disease (NAFLD) is growing to be a common form of liver condition, as rates of obesity, diabetes, and metabolic syndromes continue to rise. Lead author of the study Dr. Ayako Suzuki said, “While most NAFLD patients have a mild disease, known as fatty liver or hepatic steatosis, some patients present with NASH, which is more severe and increases overall mortality. Our study aim was to investigate whether gender and menopause significantly impact fibrosis severity among adult patients with NAFLD.”

The study consisted of 541 adult research subjects who had NASH, both men and women. Of the women, 28 percent were premenopausal, and 37 percent were postmenopausal.

Dr. Suzuki concluded, “Our findings suggest a protective effect from estrogen against development of severe fibrosis. Further study of the impact of estrogen on fibrosis progression in NASH patients is needed.”

Fibrosis is chronic damage to the liver, where healthy liver cells are replaced with scar tissue that never heals. Over time, this scar tissue buildup causes the liver to stop working.

Scientists at Salk Institute have uncovered a drug that stops the buildup of scar tissue. The molecule known as JQ1 not only prevented fibrosis in animals from spreading, but also reversed the damage that was done. Researchers are hopeful this one day can be used on humans affected by fibrosis and cirrhosis.

Research investigator Ronald Evans said, “After too much damage in the liver, the scar tissue itself causes more scar tissue. We can actually reverse liver fibrosis in animals and are now exploring potential therapeutic applications for humans.”

When the liver becomes damaged, cells that are normally intended to store vitamin A start releasing it, which then travels to the injury site and creates thick scar tissue as a means for repair. When injury is chronic, healthy cells ultimately become replaced with scar tissue, potentially leading to organ failure.

Author of the paper Michael Downs added, “Traditional therapies targeting inflammation don’t work because these cells have multiple ways to bypass the drug. In contrast, our strategy was to stop the fibrotic response at the genome level, where these pathways converge.”

BRD4 is a regulator of liver fibrosis, and the researchers found that JQ1 successfully inhibits BRD4. Fortunately, JQ1 is being added to a new class of drugs being tested for cancer in human trials.

The hopes are that drugs containing JQ1 will soon be made widely available in order to help the millions of liver fibrosis patients worldwide.