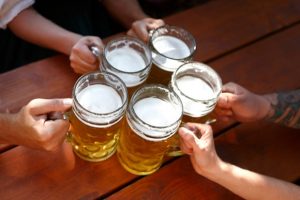 Liver and brain link plays an important role in regulating alcohol consumption. One of the senior investigators Paul Elliott explained, “Alcohol drinking in excess is a major public health problem worldwide and we need to find new ways of reducing the harmful effects of alcohol in the population. Even small shifts downward in the average amount of alcohol people drink may have major health benefits.”

The World Health Organization suggests that 5.9 percent of all deaths worldwide could be attributed to alcohol. Alcohol has a causal association with over 200 different conditions along with unintentional accidents, including car accidents and other injuries.

Drinking habits are known to be inherited and yet not many genes linked to a person’s drinking style have been uncovered. Identifying genes associated with drinking habits is a challenge because a large pool of data is required.

The researchers pooled together data from over 105,000 people of European descent to determine their drinking habits. The researchers found that variations in the gene β-Klotho were associated with the scale of alcohol consumption, so this gene may play a role in one’s drinking behavior.

Further analysis found that mice without β-Klotho had a higher preference for alcohol, compared to mice with the gene.

The researchers then looked at the liver hormone FGF21 which normally inhibits alcohol under normal conditions. They found that the hormone had no effect in the mice without β-Klotho, suggesting that the role of FGF21 is influenced by β-Klotho gene.

Elliot concluded, “The results of our study point to a previously unrecognized genetic determinant of alcohol drinking among the general population. Our findings may eventually lead to new treatments for people whose health is being harmed by drinking.”

Related: Why your liver will still get sick even if you don’t drink


Key enzyme that controls impulse drinking is missing in alcoholics

Alcoholics may be missing a key enzyme that helps control impulses to drink. Researchers found that turning off production of the enzyme PRDM2 in the frontal lobes of rats led the animals to drink more alcohol, even when they didn’t like it.

Study leader Markus Heilig explained, “PRDM2 controls the expression of several genes that are necessary for effective signaling between nerve cells. When too little enzyme is produced, no effective signals are sent from the cells that are supposed to stop the impulse. We see how a single molecular manipulation gives rise to important characteristics of an addictive illness.”

“Now that we’re beginning to understand what’s happening, we hope we’ll also be able to intervene. Over the long term, we want to contribute to developing effective medicines, but over the short term the important thing, perhaps, is to do away with the stigmatization of alcoholism. The enzyme, PRDM2, has previously been studied in cancer research, but we didn’t know that it has a function in the brain,” Heilig added.

It has been long believed that alcoholics have impaired function in their frontal lobes, but the underlying cause has long been unknown.

The researchers of the study concluded, “If frontal function is impaired, it is difficult for us to control our impulses. A person with intact impulse control can walk past a bar on a warm day and think, ‘A beer would be nice, but I can’t have one now because I have to get back to work.’ An alcoholic does not have sufficient impulse control to refrain, thinking: ‘It’s hot and I’m thirsty’.”

Related: The health benefit of alcohol you didn’t know about