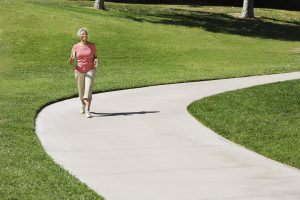 When comparing different intensity levels of exercise, researchers found there are limits to exercise benefits when it comes to weight loss, and moderate exercise is just as beneficial as intense exercise. The researchers found that moderate exercise, like walking a few miles a day, is an effective way of burning extra calories. With anything beyond that, the metabolism adapts, and calorie burning plateaus.

Lead researcher Herman Pontzer said, “The predominant view is that the more active you are, the more calories you burn every day. It’s really not a simple dose-response relationship. The body adapts to exercise, and it begins adapting at a moderate level of activity.”

The researchers studied 332 adults aged 25 to 45 from the U.S., Ghana, Jamaica, Seychelles, and South Africa. The participants wore an activity tracker for a week’s time.

Those who partook in moderate exercise burned a somewhat greater amount of calories than sedentary people – an extra 200 calories. On the other hand, more vigorous activity didn’t yield greater results. “There’s nothing in this study that suggests exercise is anything but good for you,” Pontzer added.

The message here is, if you want to lose weight, exercise alone will not cut it, and diet also plays a large factor. “We know that diet changes are the most effective way to lose weight. This study adds another piece of evidence to support that,” said Pontzer.

Pontzer suggests that greater exercise doesn’t offer greater benefits largely due to behavior. He suggests that when people overexert themselves, they may compensate by sitting or lying down more, in other words, balance out with additional rest.
There is also a physiological adaptation too, which plays a role. In his previous research, Pontzer found that hunters and gatherers from Tanzania had a similar count of the calories burnt to the average American.

Even though added exercise may not solely help you achieve your weight loss goals, it is still beneficial when it comes to overall health, and it’s still important to get in adequate amounts of exercise on a weekly basis.