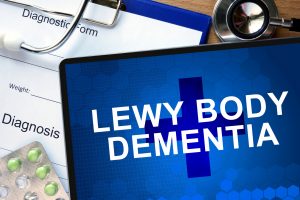 Researcher Howard I. Hurtig explained, “An early and accurate diagnosis may be lifesaving. The avoidance of medications that can worsen the symptoms of LBD cannot be overemphasized. Every patient with LBD and their caregiver(s) should memorize the list of acceptable and forbidden drugs.”

Lewy body dementia is characterized by an abnormal buildup of Lewy bodies in areas of the brain responsible for memory, behavior, movement, and personality. Parkinson’s disease symptoms primarily affect mobility and motor abilities. Diagnosis can be difficult because more than one cognitive disorder can be causing changes in the brain. For proper diagnosis and differentiation between dementia and Parkinson’s disease, it’s best to consult with a neurologist or geriatric physician.

As you can see, Parkinson’s disease dementia and dementia with Lewy bodies share many signs and symptoms. It’s important that a specialist reviews the patient’s specific symptoms to establish a proper diagnosis and recommend an appropriate mode of treatment.