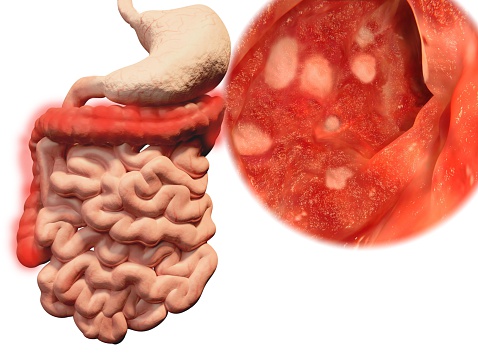 A Yale study has identified a key protein that plays a role in ulcerative colitis – a condition categorized by inflammation of the large intestine or the colon. Insight provided by the new findings could help with new treatments for the disease, which is currently on the rise.

Scientists have long known that the protein IL-18 plays a role in the development of colitis, but it was unclear if that role was protective or harmful. To understand the role of IL-18, researchers developed genetically modified mice lacking the protein or its receptors in either intestinal epithelial cells or immune cells.

The researchers found that when IL-18 was elevated it caused dysfunction in goblet cells, which form a protective mucus layer in the intestines, preventing inflammation and colitis. “What we showed was that when we have excessive production of IL-18 during inflammation, we get a defect in goblet cell development and mucus production in the intestine, leading to breakdown of the mucosal barrier,” said first author Dr. Roni Nowarski.

The research team hopes to create targeted therapy for both colitis and Crohn’s disease based on their findings. “We’re going to look for different compounds that could block IL-18 in the intestines,” said co-author Ruaidhri Jackson.