Home » Health News » Joint Pain: Why You MUST Start Walking 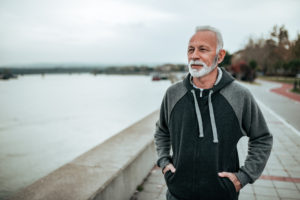 If you’re not walking much because of joint pain in your hips and knees, it’s high-time for a change.

A new study is showing that many people who suffer from osteoarthritis are not walking as far each day as they felt they could, and that could translate to a higher risk of premature death.

Osteoarthritis is not considered to be a condition that kills. Instead, it is a type of arthritis marked by worn-down cartilage between bones, often in the hips, knees, or hands. It causes pain, stiffness, and aches. There is also no cure.

But movement like walking and other forms of activity have shown to improve these symptoms. Now new research is showing it may extend life.

The study, published in RMD Open, took place over 10 years and followed more than 10,000 people aged 50 or older. Researchers found that people with OA have an 11% greater risk of premature death than people that don’t.

They also found that the strongest association between the condition and mortality risk was walking. People with OA walked significantly less.

Pain surely has a lot to do with this. But a “significant” number of study participants admitted they did not walk as much as they felt they could. That leaves room to suggest this modifiable factor could extend the length and quality of life in people with the condition.

Exercise is good at fueling itself. Meaning doing it usually leads to doing it again. The more that is done, the better people feel and respond. With that in mind, it might be worth the initial pain and struggle of getting up and at it today for how it will make you feel tomorrow.

The thought of walking can be daunting if you’ve got pain in your hips and knees. But there are tools like canes and walkers that can help reduce the stress. Starting a walking routine today can help you feel better tomorrow and much better a few weeks from now.

Whether you’re maneuvering around your home or going for a walk in the park, more movement may extend and improve your life. So, get at it!