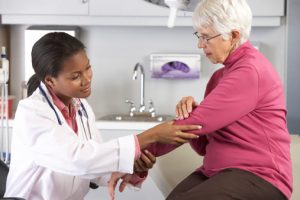 The medical industry’s long battle with joint pain could soon see the making of a truce. Researchers at Johns Hopkins have engineered a kind of synthetic that has the potential to bring about durable lubrication in many areas of the body.

They have achieved this by binding a slippery molecule that is naturally found in the synovial fluid – the cushioning fluid found in healthy joints – with the problem area.

If things go according to plan, this new innovation could open up new avenues in joint pain therapy, help artificial joints function smoothly and even provide additional comfort to contact lens wearers.

According to the research team, human joints are naturally lubricated by hyaluronic acid (HA) – a viscous fluid carbohydrate present in connective tissue, synovial fluid, and even in the fluid in the eye. One type of HA also fights against inflammation and helps prevent metabolic damage in the cells. When the concentration of HA decreases, it can lead to joint problems. In fact, aging joint, arthritic joins or even damaged joints of a non-specific nature have far lower concentrations of HA than normal, healthy joints. This happens because a protein that binds HA molecules to joint surfaces loses its ability to retain HA where it is needed. The current popular practice adopted by clinicians is to inject HA into painful joints via a process called viscosupplementation. But this is a temporary solution, as the absence of the protein means that the body’s natural cleaning processes soon wash away the injected HA.

To address this problem, a team of scientists led by Jennifer H. Elisseeff, Ph.D., professor at the Wilmer Eye Institute at Johns Hopkins and in the Johns Hopkins University departments of Biomedical Engineering and of Materials Science and Engineering, took up the challenge of identifying a way of retaining HA in the joints.

They started by looking at molecules known as HA-binding peptides (HABpeps) that stick to HA. In the laboratory, the researchers tied HA onto surfaces that included natural and artificial cartilage with the help of HABpep, and a second synthetic molecule, polyethylene glycol.

When the researchers tested this ‘tied HA’ in animals, they found that the bound HA didn’t easily wash away. Moreover it reduced inter-surface friction as successfully as when these tissues were immersed in a bath of HA.

To further test the new HA, a group of similar rats was divided into two. In one half they injected a HABpep designed to attach to cartilage in rat knees and followed it with HA injections. In the other half they injected HA directly without pre-conditioning the rats with HABpep.

The results showed that in the rats that were pre-injected with HABpep, the HA stuck around 12 times as long as it did in rats that hadn’t been given HABpep. The results clearly indicate that these peptides take viscosupplementation to a whole new level.

According to Elisseeff, the great thing about this whole concept is the fact that synthetic materials are being used to mimic lost natural function.

Of course, it will still be a while before this material is available to patients, but Elisseeff and her team are very excited to be part of yet another project wherein scientists have looked to nature as an inspiration for solving medical problems.