Home » Health News » Is Honesty Playing a Role in That Nagging Cold? 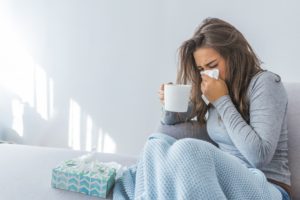 Let’s be honest here—we all lie a little bit. Just a little. For example, are you that tall, or are those heels? Do you really not have time to see your friend, or do you just not want to? Did you really walk uphill both ways to school?

Research published in the Journal of Basic and Applied Psychology indicates that when Americans are talking to each other, 60% tell at least one lie in a 10-minute conversation. It may not seem like a big deal. An extra detail here for effect, a simple excuse that doesn’t harm anybody, or a way to avoid hurting somebody’s feelings are all ways people lie to each other—often thinking it’s for the greater good.

But those lies could lead to physical symptoms.

A study from researchers at Notre Dame University found that when participants were instructed to be completely honest—not even tell little white lies—they showed improvements in physical health.

Lead author Anita Kelly explained, “Recent evidence indicates Americans tell about 11 lies per week.” She continued, “we found that the participants could purposefully and dramatically reduce their everyday lies, and that in turn was associated with significantly improved health.”

The no-lie group took about five weeks to completely adjust, after which point their honesty led them to experience fewer symptoms like headaches, sore throat, dizziness, and nausea compared to control groups.

Keeping things bottled up can also add to stress, which can have more severe health effects like increased inflammation and a higher risk for heart disease. Depending on the size of the lie, it could be very detrimental to mental and physical health.

So, if you’ve got some symptoms you can’t kick, take a look at how many little lies you might be telling. Coming clean and saying what you really think might make you feel better, while potentially improving relationships too. It could take a little effort, but after a while, telling the truth could have some big-time health benefits.