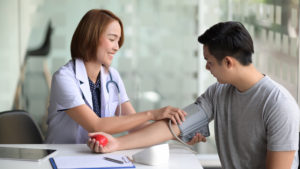 Most people recognize the 120/80 ratio as one thing: a healthy blood pressure. But should it be the goal for everybody?

A blood pressure reading of 120/80 millimeters of mercury (mmHg) means systolic pressure is 120 mmHg and diastolic is 80 mmHg and is considered healthy. Recently, however, the parameters have shifted.

The American College of Cardiology and American Heart Accusation (ACC/AHA) have set guidelines recommending that systolic blood pressure be no higher than 130 mmHg for those over 65. The is a cohort largely affected by high blood pressure (hypertension).

Half of the U.S. population over 60 has high blood pressure and it is a major concern for heart health.

At 80, the risks of high blood pressure can be even more pronounced. Members of this age group are often battling several chronic conditions and taking multiple medications for treatment. A new study wanted to see if lowering systolic blood pressure in this cohort to 120 posed health risks or benefits.

Researchers examined findings from a randomized trial of 1,167 participants over 80 years old. Twenty-seven percent had a history of heart disease and the majority had three or more chronic health conditions and more than half were regularly taking five or more medications.

The average systolic blood pressure of the participants was 142 mmHg and the average age was 84.

Participants were randomly split into two groups and one underwent “aggressive” efforts to reduce systolic blood pressure to 120 or below. They found that knocking it down to these healthy levels led to a lower risk of heart disease and cognitive impairment.

But it wasn’t necessarily a smooth ride.

The healthy blood pressure group experienced a high incidence of significant changes in kidney function. In fact, many were hospitalized for kidney damage. Most of the participants recovered, but it does indicate an ideal blood pressure might not be healthy for everybody, or at least come without a cost for some populations.

Perhaps it was the medications that led to kidney trouble, or maybe I was something else. Regardless, there seems to be some risk of drastic approaches to lower blood pressure. Ultimately, it is up to you to decide if the risk is worth the reward.

That said, aiming to reduce systolic blood pressure—if it is in the 140 mmHg range, is beneficial. Aiming for a mid 120 or 130 measurement may be a less risky pursuit.