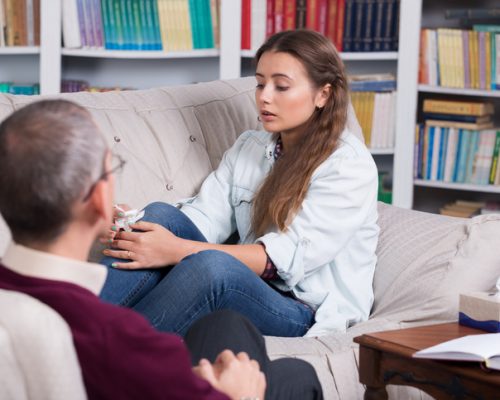 Irritable bowel syndrome is associated with independent brain-to-gut and gut-to-brain pathways, according to research. Researcher Dr. Nicholas J. Talley said, “This is an exciting time as the causes of IBS and other functional gastrointestinal disorders (FGIDs) are slowly being unraveled. The recognition that while nerve signaling is bidirectional, either the gut or the brain can initiate and drive IBS and other FGIDs is another important step forward in helping to solve the mystery of why and how these syndromes occur.”

The researchers used a validated survey containing questions on Rome III IBS and functional dyspepsia (FD) and the Hospital Anxiety and Depression Scale to test their hypothesis.

At the start of the study, 16.5 percent of the 1,900 participants had IBS, 14.2 percent had FD, 11.8 percent had postprandial distress syndrome, and 6.1 percent had epigastric pain syndrome.

Previous studies have shown a link between anxiety and depression in IBS. A study presented at the 22nd United European Gastroenterology Week (UEG Week 2014) in Vienna, Austria, found that depression affects the processing of pain in IBS. Professor Sigrid Elsenbruch said, “Our study has shown that patients with IBS are less able to suppress pain signals in the brain coming from the bowel and that depression plays a role herein. This study confirms the complex relationship between the gut and the brain and shows that affective disorders may contribute to the development or maintenance of disturbed pain processing in IBS.”

Prof. Elsenbruch added, “The fact that so many people with IBS have anxiety and depression has led many to speculate that IBS is primarily a psychological, not a physical, disorder. However, the condition is complex and most likely results from an interplay between psychological and biological factors. In fact, we don’t really know whether anxiety and depression result from having IBS or whether they contribute to the development or maintenance of symptoms. In many patients, both possibilities may be true at the same time.”

Prof. Elsenbruch’s study involved 17 IBS patients and 17 controls. Neuroimaging has revealed a lower pain threshold in patients with IBS. MRI scans were used to examine brain areas associated with pain processing, while the patients received a placebo intravenously but were told it was an antispasmolytic drug. The goal was to observe activation patterns during a placebo response.

Healthy individuals demonstrated a reduction in neural activation in pain-related areas of the brain during the placebo and saline treatment. The same did not hold true for IBS patients revealing a deficiency in central pain inhibitory mechanisms. In addition, the researchers found that those with higher depression scores on the Hospital Anxiety and Depression Scale (HADS) were also associated with lower central pain inhibition.

Prof. Elsenbruch concluded, “Our findings suggest that patients with IBS do not process visceral pain signals in the same way as healthy people and are unable to suppress pain signals in the brain and, as a result, experience more pain from the same stimuli. The fact that the presence of depression was associated with altered brain responses suggests that depression may contribute to these abnormal pain processes in IBS patients.”

Dr. Talley from the recent study added, “We speculated that there are two distinct types of functional gastrointestinal disease that others have not recognized. For example, IBS in a subgroup may first begin with gut symptoms (pain, diarrhea, constipation, bloating, etc.) in those free of psychological distress and only later does new-onset anxiety or depression develop, implicating gut disease as the primary driver of the entire symptom complex (a gut-to-brain disease).”

“On the other hand, we speculated there is another quite different subgroup where disease begins with anxiety or depression and only later do new onset gut symptoms develop, and this is likely primarily a central nervous system cause (probably through the stress system), or a brain-to-gut disease. This is exactly what we found, with gut disease occurring first followed by new onset psychological distress in about two-thirds of people from the community over a one-year follow-up,” Dr. Talley added.

Behavioral therapy can be recommended as a form of treatment for patients with irritable bowel syndrome. Stress and anxiety have been shown to aggravate IBS, so by controlling your emotions you may have greater success in symptom relief.

Although these therapies won’t aid with all IBS-related symptoms, they can help improve stomach pain, diarrhea, constipation, and some other problems. Besides, once you are not experiencing these symptoms, you will find your stress and anxiety levels go down.

A combination of behavioral therapy and medical intervention may be your best bet for proper IBS treatment.