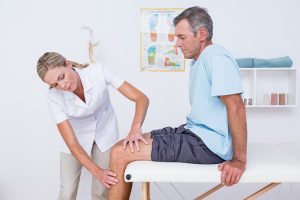 Researchers from Boston University found that reducing the inflammation did not reduce pain significantly, which led researcher Tuhina Neogi, M.D., Ph.D., to write, “Perhaps once sensitization or heightened sensitivity has occurred, removal of the inflammatory stimulus may not be sufficient to alter the sensitization.”

The researchers studied knee radiographs and MRIs from 1,111 participants. Pressure pain threshold was taken at baseline and again at follow-ups 24 months later in the wrist and patellae.

Twenty-one percent of participants reported frequent knee pain at baseline. Sixty-six percent of participants had synovitis, 66 percent had effusion and 79 percent had BMLs. Those with synovitis had lower pressure pain at baseline and at follow-up had a significant reduction in pressure pain threshold. This indicated that those patients had become sensitized.

Effusion and BMLs were not associated with baseline pressure pain threshold or change in pain pressure threshold at the follow-up.

The findings were published in Arthritis and Rheumatology.