Home » Health News » How Your Neighborhood Affects Your Memory 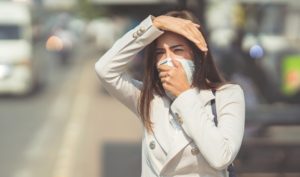 What’s better than the relationship with a good friend that engages in a constant stream of trash talk? Not much. There’s one friend I’ve got who I’ve been dealing it to for decades—and he to me—and a new study suggests he might be on to something.

Here’s the synopsis: he’s from a small town and I’m from the city. I used to tell him that I was inherently smarter because I had to remember more things to get through life. Whereas he had to know one street to get everywhere he needed to go, I had to remember countless twists and turns. Basically, I had to be smarter because my brain was forced to deal with, and remember more, on a daily basis. His argument was that all that stuff made it impossible to think and would end up frying my brain. He also said we just had to know and remember different things.

And while he wasn’t exactly right, new research is showing that air pollution—an inescapable reality of urban or suburban living—may contribute to Alzheimer’s and other forms of dementia.

Researchers from the University of Southern California’s Keck School of Medicine showed that air pollution was associated with changes in people’s brains that were connected too poor memory performance. They studied nearly 1,000 women between the ages of 73 and 87 and each underwent brain scans five years apart. Researchers also assessed where they lived and environmental data to estimate exposure to particulate matter (pollution) in the air. As I have alluded to, the ones who were exposed to higher levels of particulate pollution had more Alzheimer’s-like changes in the brain and memory decline than those with the least.

So, if you want to protect your memory and reduce the risk of Alzheimer’s, do you have to move where the air is fresher? Not necessarily—although it might be a bit of an added bonus. More realistically, however, there are other steps you can take to hold onto your memory and brain health.

Although there is no cure for dementia or Alzheimer’s, preventative techniques include: eating a heart-healthy diet, avoiding inflammatory foods, remaining socially engaged, participating in activities that stimulate the brain, getting adequate sleep, and staying physically active.