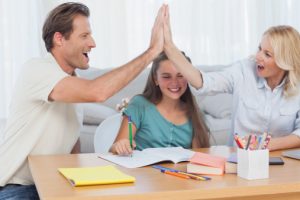 Here’s a great reason for couples to share childcare duties: according to a new research study that is being presented at the 110th Annual Meeting of the American Sociological Association (ASA), couples who share the childcare duties have higher quality relationships and, get this, much better sex lives than couples who don’t.

The trio took 487 heterosexual couples with children from the MARS study and divided them into groups based on the childcare workload. The workload included the three dimensions of childcare, a) physical/emotional childcare, b) interactive childcare, and c) passive childcare, supervising and monitoring. The questions asked to determine the workload capacity were:

Of the four tasks, only one (the playing one) was a physical task, even though it did not involve feeding and bathing.

Based on these questions the participating couples were divided into three groups.

The next step was to look at each couple’s relationship quality – based on answers to questions regarding relationship satisfaction and relationship conflict – and sexual frequency, as well as the quality of their sex life.

The team found that when the women did most or all of the childcare, the couples reported lower quality relationships and sex lives when compared to couples that split the childcare responsibilities.

But strangely enough, when the men did most or all of the childcare, there were no negative effects on the quality of the couple’s relationship. They had just as much sex as couples who split the childcare responsibilities and were just as satisfied with the amount of sex they were having.

In the future, the team wants to do in-depth research to understand a bit more about the mechanisms behind why couples with shared childcare arrangements reported higher quality relationships and sex lives. Whether they find any fresh insights or not, this reporter is glad that equal sharing of the childcare workload leads to better relationships. Equality rocks!