Home » Health News » How Much Cardio Do You Need to Improve Heart Health and Longevity? 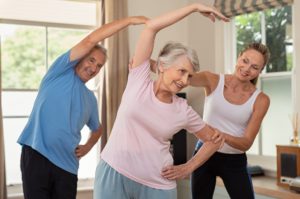 We’ve all seen that person sprint past us on the sidewalk breathing like they’re taking a stroll on the beach. Those people have the cardiovascular capacity of highly trained athletes. Thankfully, you can save yourself the huffing and puffing.

Your heart likes it when you move. But to get benefits, you really don’t need to move that much. At the very least, 15 minutes per day can have some effect. Getting about 150-minutes per week (30 minutes x 5 days) is a bit better. More is what you really want.

The U.S. Department of Health and Human Services recommends at least 150 minutes per week of moderate physical activity. That means that you’re breaking a bit of a sweat, but not breathing so hard that you can’t clearly tell your friend how much you’re sweating.

What’s great about that recommendation is that there is evidence showing you don’t have to do it all at once. You can break your 30-minutes down to three 10-minute sessions (after breakfast, lunch, and dinner) or two 15-minute sessions (morning/evening).

Getting more exercise, however, is even better. To a point…

Those who followed that protocol were found to live about three years longer than those that didn’t. And if you’re doing more than an hour? That’s great! You’ll be in much better shape than your friend who’s only doing 15-minutes and about roughly on par with your friend pushing themselves for 90. Exactly how much better? People doing 15-minutes had a 20 percent less chance of dying than those who did none. Those who did 45-60 minutes had a 39 percent lower risk.

At the end of the day, one of the most important things you can do for your heart and longevity is exercise. Finding time for some brief bouts of movement each day can lower the risk for heart disease and improve a number of other health markers.