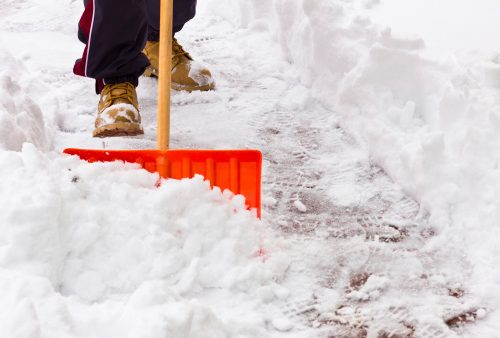 Heavy snowfalls have been linked to an increase in hospitalizations and deaths due to cardiac events, according to new research published in the Canadian Medical Association Journal.

The increase in heart attacks or myocardial infarctions were seen predominantly in men and are believed to be associated with the need to shovel after a winter storm. Dr. Nathalie Auger of the University of Montreal Hospital Research Centre explained, “Men are potentially more likely than women to shovel, particularly after heavy snowfalls. Snow shoveling is a demanding cardiovascular exercise requiring more than 75 percent of the maximum heart rate, particularly with heavy loads.”

Researchers reviewed data from two separate databases involving 128,073 hospital admissions and 68,155 deaths associated with myocardial infarctions that all took place in Quebec between 1981 and 2014. The data from November to April of these years—the period in which snow falls in that region—was compared to historic weather conditions gathered from Environment Canada.

The review found that 60 percent of hospital admissions and deaths due to heart attacks during these months were in men, with one third of these instances taking place the day following a snowfall. This link was found to be even stronger with snowfalls that lasted two to three days, and the risk of suffering a cardiac event was elevated regardless of a patient’s age, cardiovascular risk factors, or pre-existing health conditions.
However, this association between heavy snow and hospitalizations and/or deaths due to heart attacks was not found in women. The authors commented, “The association between snowfall and MI was stronger among men, and weaker or absent among women.”

The team acknowledged the limitations of their research, such as the lack of sex-specific data on shoveling habits, as well as the size of the area shoveled and whether snow was removed manually or using a snow blower. However, they assert that the association observed between snowfalls and cardiac events could prove that shoveling increases the risk of heart attack in men with further research.

Related: Do this one thing to reduce your risk of heart attack

Tips to avoid back pain while snow shoveling