Home » Health News » Heat Is More Harmful Than You Might Think 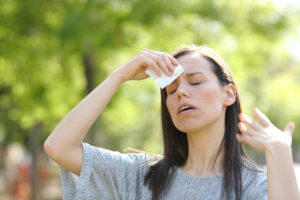 You might recall that last week, we wrote to you concerning various ways to stay cool this summer. Well, guess what? A new study has come out showing how heat is likely way more dangerous than you thought.

How’s that for timing?!

Heat has always been a known killer. But the extent of it might be well under-represented. Researchers previously suggested that it kills about 600 people per year, but a new study is showing it could be more than 5,000.

And COVID-19 isn’t going to make staying cool any easier. With people unable to go to air-conditioned places like movie theatres, restaurants, malls, or offices, it’s a lot harder to beat the heat. And there could be severe complications.

The researchers used data from the U.S. National Center for Health Statistics on deaths in the most populous counties from 1997–2006. What they learned was that “moderate heat” was more deadly than “extreme heat.”

Researcher Kate Weinberger from the University of British Columbia said that dangerous levels of heat could depend on where a person lives. For example, a 90-degree day might be more hazardous in Seattle than Phoenix.

People in Phoenix tend to be prepared for temperatures considered moderately hot. Homes in Phoenix are more likely to be equipped with air conditioning or swimming pools than in Seattle, making 90 degrees more bearable and less taxing.

Based on their analysis, the researchers estimate that moderate heat may kill more than 3,300 people, while extreme heat could be responsible for 2,300 deaths.

According to the Centers for Disease Control and Prevention (CDC), people at high risk for heat-related illness include young children under 4, people 65 and older, and people that are overweight or have existing medical conditions like diabetes or heart disease.

Social isolation can play a role in risk as well.

To limit your chances of heat-related illness or death, try to get your existing health conditions under control. Invest in an air conditioner if you don’t have one (and can afford it) and keep cooling packs ready to access in your freezer.

If you’re out and about, consider trying the recommendations we offered last week and note that you don’t necessarily need an extreme heatwave to be at risk.

Stay cool and safe this summer!