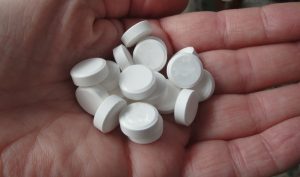 Prescription NSAID painkillers may be tied to a higher risk of heart failure, according to recent findings. Non-steroidal anti-inflammatory drugs (NSAIDs) were found to increase the risk of heart failure by 20 percent, based on the analysis of the medical history of 10 million patients. The risk also rises with the amount of NSAIDs taken.

The study only highlights an association between the use of NSAIDs and heart failure risk, but doesn’t imply causality.

NSAIDs work to decrease inflammation by blocking cyclooxygenase, an enzyme which comes in two forms. One form, COX-1, protects the stomach lining, while the other form, COX-2, is a result of injury or inflammation.
Traditional NSAIDs like Tylenol block both types of the enzyme, and that is why some people experience an upset stomach when taking these meds.

NSAIDs also cause sodium retention, and this is what concerned the doctors with regards to these medications contributing to heart failure.

Although NSAIDs are effective at reducing pain, patients should be made aware of the risk they pose on the heart. For that reason, it’s important that you speak to your doctor if you do take NSAIDs regularly and monitor your heart health to ensure it is healthy or spot any changes early on.

Over-the-counter painkillers found ineffective for lower back pain, harmful for liver, but may help in osteoarthritis

10 Effective natural painkillers that may surprise you!