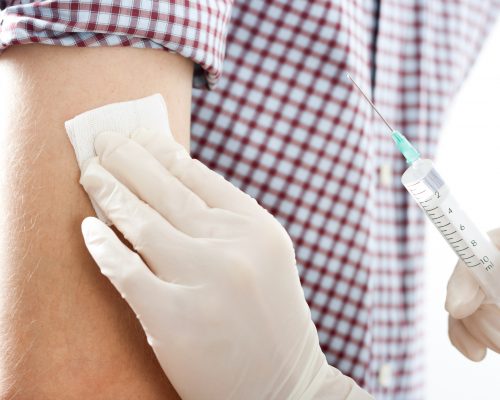 Heart attack, stroke, and heart failure hospitalization risk may be reduced with flu vaccine in type 2 diabetics. Dr. Eszter Vamos and coauthors wrote, “In this large population-based study, influenza vaccination in people with type 2 diabetes was associated with reductions in rates of hospital admission for acute cardiovascular and respiratory diseases, and in all-cause mortality across seven influenza seasons.”

Type 2 diabetics are at a higher risk for stroke, and in many countries the flu vaccine is recommended for seniors with other health conditions. Unfortunately, the effectiveness of this vaccine has been unclear.

The researchers examined 124,503 patients with type 2 diabetes, looking at whether the flu shot helped reduce hospital admission for patients with a cardiovascular event over the course of seven years.

The researchers found that during the flu season, vaccination was associated with a 19 percent reduction in hospital admissions as a result of heart attack, 30 percent for stroke, and 22 percent for heart failure. Vaccinated participants also had a 22 percent lower risk of death.

The authors concluded, “This study has shown that people with type 2 diabetes may derive substantial benefits from current vaccines, including protection against hospital admission for some major cardiovascular outcomes. These findings underline the importance of influenza vaccination as part of comprehensive secondary prevention in this high-risk population.”

An alternative study found that flu vaccine may have protective effects against heart disease and reduce the risk of a heart attack. Previous studies have found that people who receive the annual flu shot also have a lower risk of heart disease. Their risk of a heart attack during the following year was also reduced by 50 percent. The underlying mechanism that makes the flu shot so effective in protecting the heart were unidentified in previous studies.

In the present study, the researchers did uncover this mechanism. They found that the flu shot stimulates the immune system to produce antibodies that switch on certain processes in cells. These processes lead to the production of molecules that protect the heart. Based on the findings, it may be possible to develop a vaccine for heart disease.

The researchers identified a protein known as the bradykinin 2 receptor (BKB2R), which is involved in cellular processes that protect the heart. Some of the antibodies that are produced after the flu shot activate this protein, this way protecting against heart disease.

“The rate of administering flu vaccinations is disappointingly low, even in developed countries. We hope that our results will encourage more people to get vaccinated before the flu season starts,” Dr. Veljkovic concluded.