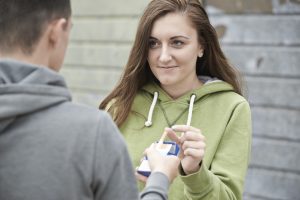 Smokers under the age of 50 face a higher risk of heart attack. Compared to former smokers and nonsmokers of the same age, smokers under 50 were 8.5 times more likely to suffer a heart attack.

Patricia Folan reviewed the study and commented, “Through comprehensive tobacco-control programs that include environmental smoking bans, high taxes on cigarettes, and anti-tobacco media campaigns, we can decrease the rates of smoking/tobacco use, heart disease, and many other health conditions.”

Older smokers also had a higher risk of heart attack, too. Compared to former smokers and nonsmokers of the same age, smokers between 50 and 65 years old were five times more likely to suffer a heart attack.
Folan added, “All the patients who smoke tell us they wish they had quit sooner, before their health was compromised, but they just didn’t know how to do it.”

The biggest difference between young and old former smokers was that younger smokers did not have as many other risk factors of a heart attack, such as hypertension, high cholesterol, or diabetes. And yet, younger smokers still had a higher risk of heart attack than older smokers.

The study highlights the importance of improving the existing preventative measures to help younger adults quit smoking or deter them from starting to smoke altogether.

Smoking in diabetes shown to be life-threatening

Heart wall thickens due to smoking, contributes to heart failure