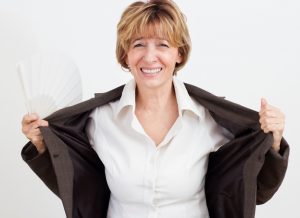 Heart attack mortality is lower among menopausal women, compared to men. While menopause is a known risk factor for heart disease, the research study found women faced a lower risk of dying from a heart attack, compared to men. Unfortunately, the gender differences weren’t as significant among racial minority groups.

Study lead author Catherine Kim said, “Our findings showed that the advantage to going through natural menopause wasn’t much higher than surgical menopause. Black women should be aware that the belief that women have a lower risk of heart disease than men may not necessarily apply to them. So, it is particularly important for black women to engage in healthy preventive behaviors, such as exercising regularly and maintaining a healthy weight. But all women should adopt healthy behaviors, since heart disease remains the No. 1 cause of death in women.”


Women suffering from hot flashes, night sweats have a higher risk of cardiovascular disease and stroke

The study included 304 women who were nonsmokers and free of cardiovascular disease. Although the women reported lower levels of hot flashes, the researchers found that women tend to under-report their hot flashes.

Intima-media thickness in the carotid artery – an indicator of subclinical atherosclerosis – was found to be significantly higher among women who experienced frequent hot flashes even after adjusting for other factors, including weight, diabetes, and cholesterol.

“Frequent hot flashes may be a marker of underlying risk, although it is not known whether treating the hot flashes will have any impact on underlying cardiovascular risk. We cannot necessarily say there is a causal link from these data,” added Dr. Thurston.

Can you reverse heart disease?