Home » Health News » Hearing problems may stem from the brain, not the ears 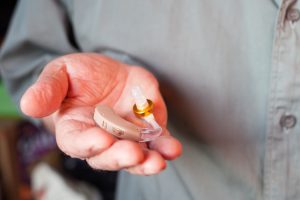 Although hearing loss is often associated with problems with the ears, new findings suggest that it may stem from the brain instead. Difficulty processing conversation in loud settings may indicate that the brain’s ability to process speech is impacted.

According to coauthor Jonathan Simon, the findings demonstrate that “separately from any typical hearing loss that might occur as we age, our brains also get worse at processing the sound of talking when there are other sounds at the same time. The background noise may not even be considered especially loud by younger listeners.”

But “the implication is that typical older adults need to exert more effort, and take more time, in order to understand what someone is saying to them when there’s also noise, even only moderate noise, around them,” Simon added.
Nearly one-third of Americans aged 65 to 74 and half of those over the age of 75 have some degree of hearing loss.

The study included 17 young adults and 15 older adults who all had normal hearing and were dementia-free. All participants underwent hearing tests and brain scans.

The younger adults performed better than the older adults in both quiet and loud settings, but the seniors fared particularly worse in louder settings. The brain scans offered some useful insight into the test results.

The scans showed that areas of the brain involved in speech comprehension were weaker in the older adults, meaning that information took longer to process. The researchers suggest this is a normal part of aging.

Simon explained, “Typical seniors who have difficulty understanding what someone is saying in a noisy room will have both kinds of degradation.” Hence, even though hearing aids can address some hearing loss issues, they can’t solve the problem in its entirety.

Treatment methods for hearing loss then need to expand to target the brain, too.

The findings were published in Journal of Neurophysiology.