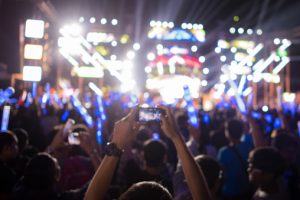 Temporary hearing loss caused by loud concerts can be prevented by wearing earplugs. Although the findings may appear obvious, many concert-goers wouldn’t dare to wear earplugs when they are off to see their favorite band or musician – but the threat of hearing loss is a serious one.

Research suggests that teen hearing loss has jumped 31 percent since 1988. A large contributing factor for this is an increased exposure to loud concerts – indoors and outdoors.
For the new study, 51 young adults attended an outdoor music festival for 4.5 hours – half of the group were selected to wear earplugs.

The average noise level was 100 decibels, which is the level known to pose a risk to hearing. Hearing loss was diagnosed after the festival and found in 42 percent of the participants who did not wear earplugs and eight percent of those who did. Post-concert tinnitus was 40 percent in those without earplugs and 12 percent in those who did wear earplugs.

The research team wrote that the findings add onto the “evidence that earplugs are effective in preventing temporary hearing loss during high recreational music levels. Therefore, the use of earplugs should be actively promoted and encouraged to avoid noise-induced hearing loss.”

Preventative measures are the best way to protect your ears against damage because once your hearing is gone it cannot be restored.