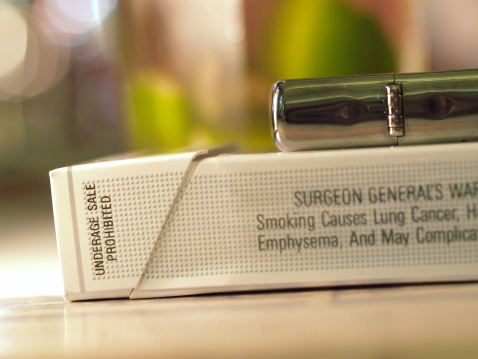 A new study has found that graphic images printed on cigarette packs are actually an effective way to prompt smokers to quit. The findings suggest that smokers who were exposed to graphic images over the course of four weeks had higher negative perceptions of smoking compared to those who only saw written text warning labels. Graphic images were linked to believing smoking was much more harmful.

Co-author Dr. Ellen Peters said, “The graphic images motivated smokers to think more deeply about their habit and the risks associated with smoking.” Lead author, Abigail Evans, Ph.D., added, “Our study provides real-world evidence of how viewing these graphic images over time has an impact on smokers beyond what occurs with simple text warnings.”

The use of graphic labels for cigarette packs was mandated back in 2009, but then was appealed in court and the court ruled the labels were, “unabashed attempts to evoke emotion … and browbeat consumers into quitting.”

The findings suggest that the court was incorrect in how these labels promote smoking cessation. Dr. Peters added, “Smokers weren’t browbeaten by the images. The images definitely did stir their emotions, but those emotions led them to think more carefully about the risks of smoking and how those risks affected them. What the court is missing is that without emotions, we can’t make decisions. We require having feelings about information we collect in order to feel motivated to act. These graphic warnings helped people to think more carefully about the risks and to consider them more.”

The study involved 244 adults who smoked between five to 40 cigarettes a day.

Participants smoked their preferred brand for four weeks with either graphic images on them, text warnings or a combination of both. After the four weeks, participants answered surveys about their experience with the cigarette packs.

Results found that those who smoked packs of cigarettes with written and visual warnings were more likely to feel worse about smoking compared to those who only received text warnings.

Dr. Peters explained, “The feelings produced by the graphic images acted as a spotlight. Smokers looked more carefully at the packages and, as a result, the health risks fell into the spotlight and led to more consideration of those risks. For a health issue like smoking, which causes about a half-million deaths a year in the United States, even small effects can have a large impact in the population. Policies requiring such labels have the potential to reduce the number of Americans who smoke.”