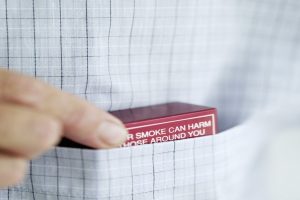 Graphic cigarette labels depicting the health consequences of smoking could help cut down on the numbers of smokers in the U.S. The study suggests these labels could save up to 650,000 lives, along with preventing premature births and low weight babies by the year 2065.

Study author David Levy explained, “By any standard, this would be considered a very, very successful public health intervention.”

It is estimated that 45 million Americans are smokers. Although graphic warning labels are commonly seen on tobacco products elsewhere in the world, the U.S. has yet to implement this effective strategy to cut down on smoking.
The Supreme Court along with the FDA ruled against such labeling as it went against tobacco companies’ First Amendment commercial speech rights. Many other health groups have filed a lawsuit to the court in order to push the FDA to issue such regulations about cigarette packs.

The World Health Organization recommends graphic warning labels on cigarette packs, and so far about 70 countries have implemented or are considering such a policy.

Levy added, “The other countries have persisted and gotten the graphic warnings, so if they can do it, there’s no reason that the United States shouldn’t do it.”