Home » Health News » Gout Risk May Increase with Obesity, Hypertension, and Diuretic Use 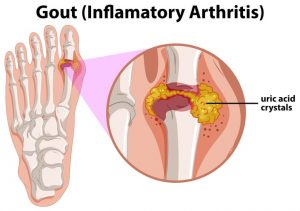 Gout is a form of arthritis caused by excess uric acid in the bloodstream. It affects 2.5 percent of all adults in the U.K. The symptoms of gout appear when uric acid crystals begin to form in the joints. The body’s response to the uric crystals is to attack them, causing inflammation and joint damage, which is eventually irreparable.

A new study focused on identifying the risk of gout in populations with obesity, hypertension, and diuretic use. After finding 9,923 articles related to the topic, 11 were admitted into the meta-analysis. The population of the study was focused on adults over the age of 18.

Studies were included in the analysis if participants were aged 18 or older by the end of the follow-up period, even if they were less than 18 at the outset. Each article examined at least one of the three areas of analysis (obesity, hypertension, or diuretic use) in relation to incidence of gout. Studies were included only if the experimental population was made up of both men and women.

The results of the study showed that all three hypothesized risk factors did show an independent increase in the risk of gout. Obesity, hypertension, and diuretic use doubled the risk of gout, respectively. This is the first meta-analysis of hypertension as a risk for gout.

Both obesity and diuretic use has been previously identified in meta-analyses as increasing the chances for developing gout, although past studies have mainly failed to quantify the increase in the risk of incident gout in relation to these factors.

Obesity is a rising health concern across the globe and is often associated with the development of several comorbidities, resulting in a higher death toll each year. Past research has shown that weight loss interventions can also help in the prevention of the development of gout. This current study has added evidence to the pool of research showing that obesity has a significant impact on the risk of gout development, increasing the need to combat rates of obesity.

This study also adds to the basis of literature that relates the use of diuretics with an increased risk of gout. Diuretics cause patients to produce urine at a higher rate and are often prescribed to patients with high blood pressure, or hypertension.

The researchers behind the current study believe that, when possible, the use of diuretics to treat hypertension should be avoided for an alternative treatment. Both hypertension and diuretic use independently double the risk of developing gout, meaning that together they have an even higher impact on the likelihood that the condition will develop.

This study shows that obesity, hypertension, and diuretic use each have a significant impact on the likelihood that someone will develop gout. These population should be considered at risk for gout and prescribed preventive measures as soon as possible.