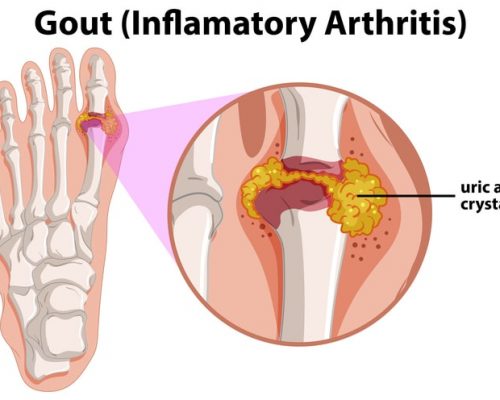 Gout is a form of arthritis that most commonly affects the joints in the knuckles in the hands and feet. The inflammation is caused by an autoimmune response to the build-up of uric acid crystals in the joints. It is the most common form of arthritis in adults, affecting 3.9 percent of American adults. The condition is characterized by chronic inflammation and oxidative stress, both of which also have negative effects on the cardiovascular system.

A new study has found a link between gout and the likelihood of developing atrial fibrillation. Atrial fibrillation is the most common type of cardiac arrhythmia (irregular heartbeat) in the world and it significantly increases a person’s risk of stroke and death. The risk of atrial fibrillation is increased between 9 percent and 13 percent in the general population, but until now, little has been known about how the condition would be affected by aging.

When the data were adjusted for confounding variables, the results showed that patients with gout had a 90 percent increase in the risk of developing atrial fibrillation compared to the control group. They found that older age, white race, and higher Charlson-Romano index score were all independent risk factors for the development of atrial fibrillation.

“Our study finding advances our understanding of cardiovascular comorbidity of gout in the elderly,” Dr. Jasvinder Singh and Dr. John Cleveland wrote. “Healthcare providers who already discuss the possible increased risk of CAD (coronary artery disease) with people with gout should also incorporate the discussion regarding the associated increased risk of AF. These discussions can fully inform patients with gout that associated ongoing inflammation may have implications not only for their joints, but other vital body organs.”

One of the strengths of this study is the population sample. The medical data was collected from Medicare claims, which is accurately representative of the American population over the age of 65. They also factored in the confounding effects of age, sex, race, medical comorbidities including cardiovascular disease and medication use. One weakness of the study is that they did not adjust their analysis or consider the effects of the use of aspirin and other non-steroidal anti-inflammatory drugs, alcohol use, smoking, or exercise on the results, all of which are potentially confounding factors. These data were not collected or taken into consideration because they are not part of a Medicare claim.

The results remain clear, however, gout significantly increases the risk of developing atrial fibrillation in patients who are 65 years of age or older. Patients in this age category should be considered at risk for both gout and atrial fibrillation. Medical practitioners should take these results into consideration for diagnostic and treatment plans.