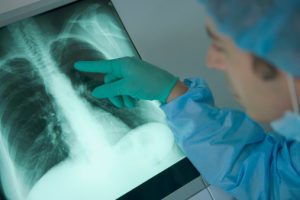 Unlike the lyrics of a famous song, ‘every breath you take’ actually sends millions of microbes into your lungs. The question is, what’s next? What happens after these microscopic organisms get into your lungs? And more importantly, why is it that some people get harmful lung infections after inhaling these microbes but not others?

To answer all the questions surrounding the effect various microorganisms that reside in our respiratory system have on us, researchers at the University of Michigan Medical School are studying these bacterial colonies at close quarters.

By analyzing how the bacterial communities in healthy individuals differ from those in diseased individuals, the researchers hope to find new avenues to help stop and even fight lung infections.

The U-M team has found a pattern that might bring fresh insight into lung infections. According to their findings, a harmful “feedback loop” could be the cause of the explosive onset of bacterial lung infections. The molecules that our cells make as distress signals in response to the bacteria, are actually accelerating the growth of certain bacteria.

The research team was the first to question how these “distress signals” affect bacterial communities in the lungs. They found that the stress molecules, called catecholamines, are one part of the body’s primary response to injury and/or stress. Earlier studies show that some bacteria grow faster when exposed to these molecules, but until now no animal or human study has determined whether the molecules are related to changes in the respiratory microbiome.

In the current study, the researchers took samples from 40 lung transplant patients in various states of health. Close analysis by the team revealed that the bacterial colonies had collapsed in the lungs of people with respiratory infections. They also found the collapse was strongly associated with high levels of catecholamines in the lung.

According to Robert Dickson, MD, lead author of several of the new papers, and an assistant professor of internal medicine, it’s a vicious cycle. The production of catecholamine is our immune system’s response to infection. These catecholamines make certain harmful bacteria grow rapidly. The end result – more inflammation and stress signaling.

Until recently, the popular school of thought was that healthy lungs are free of bacteria – microscopic organisms found only in infected lungs. But now, thanks to research led by Dickson and U-M microbiologist Gary Huffnagle, Ph.D., there is a clear shift in thinking with the pulmonary microbiome getting as much importance as the gastric microbiome.

The U-M team came up with an “adapted island model”. This model explains how the lung microbiome is populated in healthy individuals – the lungs are constantly supplied with bacteria from the mouth, just like species immigrating to islands from nearby continents
.
The lungs may not be as filled with bacteria as the digestive tract, but they’re not free of them either. Dickson draws a comparison between the healthy lung microbiome and the human population of Antarctica. Individuals move in and move out, but there’s not much multiplication happening.

And the analogy for damaged lungs is a tropical rainforest, abundantly teeming with food and nutrients – a habitat that’s much more hospitable for bacteria, and so they tend to thrive and multiply.

The researchers hope that this new found knowledge will help prevent, diagnose and treat lung infections more successfully. The U-M team is now starting a new project where they will analyze the microbiome of critically ill patients in ICUs.