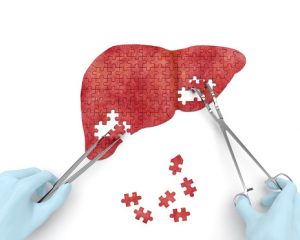 Chronic liver disease is a condition that is commonly associated with those who drink an excessive amount of alcohol, leading to damage of hepatic cells. However, there is a similar condition involving the liver called non-alcoholic fatty liver disease (NAFLD), which, as the name suggests, does not stem from alcoholism. This has puzzled scientists for decades, as no cause of the condition has been identified. Nevertheless, an international study from the UT Southwestern Medical Center may have come one step closer to finding a cause, identifying a striking genetic-environment interaction in the development of non-alcoholic fatty liver disease.

NAFLD is a condition where the liver is subjected to excessive fat accumulation. It is becoming an increasingly prevalent problem in the United States and has become the most common form of chronic liver disease, with and estimated three to twelve percent of American adults having a more serious form of NAFLD called non-alcoholic steatohepatitis (NASH), which can progress to liver cancer. The reasons for its occurrence are not well understood but are thought to be due to various metabolic conditions such as obesity, insulin resistance, hyperglycemia, and high-fat levels in the blood. Initial symptoms of NAFLD include:

Researchers found that obesity amplified the effect of three gene variants that increase the risk of NAFLD by different metabolic pathways. Of the three, a gene named PNPLA3 was found to have the strongest genetic-environmental interaction and it is the first genetic cause of NAFLD ever identified. This achievement was possible through a longitudinal, multi-ethnic, population-based study that included 384 subjects with cirrhosis. Their analysis showed the risk of developing cirrhosis among those with two copies of the PNAPLA3 gene who were also obese increased 5.8 times compared to those who were obese but lacked the genes in question.

Does your liver need to go on a diet?