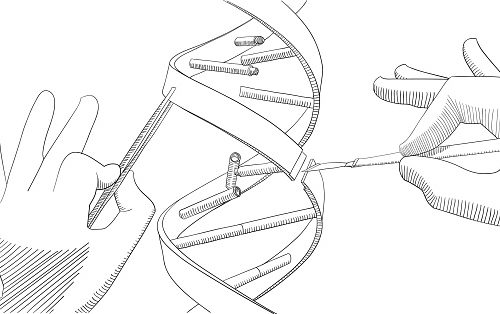 Experiencing inflammation of one or many joints in the form of arthritis is something that a large number of elderly individuals go through every day, and unfortunately, in the majority of cases, treatment modalities are quite limited. Feelings of pain, stiffness, swelling, and redness are all too common, with most pharmaceutical treatments simply relieving the symptoms. However, new research using stem cell technology may provide a “vaccine” that targets inflammation in joints, putting a stop to arthritis pain before it even starts.

“Our goal is to package the rewired stem cells as a vaccine for arthritis, which would deliver an anti-inflammatory drug to an arthritic joint but only when it is needed, to do this, we needed to create a ‘smart’ cell,” said Farshid Guilak, Ph.D., the paper’s senior author and a professor of orthopedic surgery at Washington University School of Medicine.

Currently, many of the pharmaceutical medications employed to combat the symptoms of arthritis are given systemically, meaning it has the potential to affect every part of the body, theoretically having the ability to interfere with the immune system or any other aspects of human physiology. These “smart cells,” on the other hand, deliver the medication at the targeted location desired, significantly reducing overall systemic effects. The team used CRISPR technology to replace a critical mediator of inflammation with a TNF-alpha inhibitor—whose pharmaceutical pill equivalents have been known to interfere with the immune system by reprogramming stem cells response to inflammation.
The new modified stem cells were seen to grow into cartilage tissue and even protect against inflammation over the course of a few days. Further testing is in its initial phases in mouse models to test these engineered stem cells in rheumatoid arthritis and other inflammatory diseases.

“When these cells see TNF-alpha, they rapidly activate a therapy that reduces inflammation,” Guilak explained. “We believe this strategy also may work for other systems that depend on a feedback loop. In diabetes, for example, it’s possible we could make stem cells that would sense glucose and turn on insulin in response. We are using pluripotent stem cells, so we can make them into any cell type, and with CRISPR, we can remove or insert genes that have the potential to treat many types of disorders.”

Related: How to deal with arthritis pain on a daily basis