Home » General Health » Forget The Hype: E-Cigarettes Can Poison You 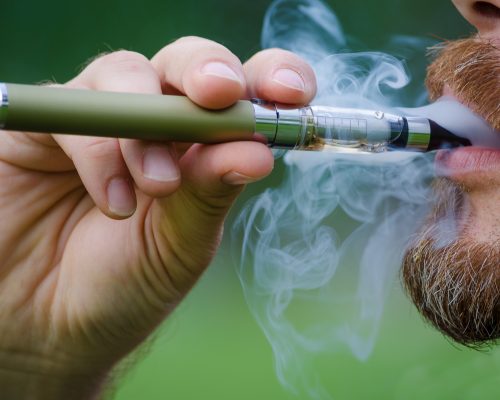 As a doctor who specializes in smoking cessation and pulmonary medicine, whenever I hear of a patient trying to quit smoking using a method that is dangerous or ineffective, I’m going to speak up. People need the right information, tools and all the help they can get to kick the habit.

That’s exactly why, when I heard about the growing popularity of the e-cigarette – the electronic cigarette – sweeping North America, I was appalled. These trendy faux smokes are dangerous! And health regulators have been mostly silent on how they plan to regulate the industry – until now.

The Food and Drug Administration (FDA) has just announced its intention to regulate e-cigarettes, which would outlaw free samples, sales to minors, and crack down on fraudulent claims and suspect ingredients. The FDA currently regulates cigarettes, cigarette tobacco, roll-your-own tobacco and smokeless tobacco.

“This proposed rule is the latest step in our efforts to make the next generation tobacco-free,” says Kathleen Sebelius, U.S. Secretary of Health and Human Services. Rah-rah!

I applaud the move, but there’s still an urgent need for public awareness and education about methods available to quit smoking – and I’m talking about legitimate methods that are safe and effective. Not smoke and mirrors.

Let me be clear: Smoking is a deadly addiction. Tobacco is the leading cause death and disease in the United States – yet more than 42 million people in the country have picked up the habit. While it’s easy to start (despite your parents’ warnings), quitting is another story.

Nicotine is addictive, and many smokers get used to the habitual “smoke breaks” in their daily lives. A chance to pause and inhale (it’s a kind of meditation in its own way) and chat with fellow smokers. Insert any number of tips and tricks to kick the habit over the years, but the e-cigarette is on a meteoric rise.

The e-cigarette is a device that looks very similar to an actual tobacco cigarette. It’s designed so that when the smoker inhales, they breathe in vapor from a chamber that comes filled with a flavored liquid or “e-juice.” The device became widely produced in North America about four years ago as a way to ease the smoker through the unpleasant physical and mental withdrawal effects that cutting out nicotine “cold turkey” can cause.

Celebrities started using them, and many thought the solution was novel and smart. Now the e-cigarette industry is worth more than a billion dollars. Imagine this: The smoker could imitate a smoking experience, while cutting out some of the harmful chemicals.  At least that is the common theory. But don’t be fooled – the contraption is just way too good to be true…

Because the e-cigarette could poison you. The CDC drew attention to e-cigarette use when calls to poison control centers saw a sharp increase. And sharp would be a real understatement. The number of calls spiked from one a month in 2010 to 215 a month in 2014. The vapor from e-cigarettes is marketed as free of the usual carcinogens found in tobacco, but there is concern over the propylene glycol, a known irritant, in the flavored juice cartridges that becomes vaporized. Clearly there is some risk when you ingest a largely unregulated substance into your lungs or through the eyes and skin.

Vaping Can Harm You – But Will It Help You Kick The Habit?

The idea that e-cigarettes can be effective to stop smoking is totally washed up, according to a report in Medscape’s Pulmonary Medicine, a web resource for the medical community. Contributing researcher Dr. Paul Cinciripini says that quitting “halfway” is a notion that should be completely ruled out: “People wanting to stop smoking may try e-cigarettes first in lieu of using one of several effective over-the-counter forms of nicotine replacement (such as the patch, gum, or lozenge) or talking to their doctor.”

This same report suggests people who use the e-cigarette are actually using the device alongside regular cigarettes, not cutting down their use at all.

And so much for bans on smoking indoors or too close to a building. The e-cigarette is the ultimate work-around. It allows smokers unlimited around the clock, no-restriction use!

The Real Fix To Beat The Addiction

There are a number of ways proven by science to be effective if you are trying to quit smoking. My approach has been to use a few methods of attack at once.

First, focus on a quit date and stick with it. Enlist the support of family and friends, and steer clear of people in your social circle who are smokers. Spending time with smokers will make it near impossible to quit.

Bring in the physical supports: Nicotine Replacement Therapy (NRT) is a line of products that includes the patch, gum and lozenges that are much different from the e-cigarette. They let you safely lower your dose of nicotine as your body adjusts. You can use NRT to ease the withdrawal from the cold turkey method, or to gradually reduce how much of the product you use over time, according to how many cigarettes you consume per day.

Hypnosis, where the patient is induced into a sleep-like state to direct behavioral change, is another method that’s shown success. It has been used as an effective treatment for phobias, and as a replacement option for those with sensitivities to anesthetic during major surgeries.

Try it in conjunction with NRT. A study by the American College of Chest Physicians found that patients who used hypnotherapy alongside nicotine replacement therapy were much more likely to be non-smokers at the six-month mark than those who used NRT alone, or quit cold turkey. In fact, 86 percent of men and 87 percent of women continued abstinence using hypnosis at the three-month check-in.

These methods are backed by science and proven success through the years, tried and true. E-cigarettes, on the other hand, are dangerous and ineffective – and giving minors a taste for smoking behaviors.

Speak to your doctor and find methods that won’t put your health at risk. If you are serious about kicking the habit, the first step is dismissing the gimmicks!