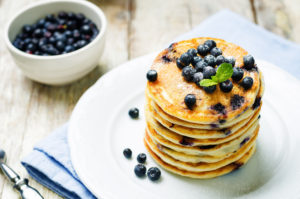 Your dietary choices and their impact on your health is greater than the sum of its parts. For example, adding some blueberries to your pancakes and syrup every morning doesn’t make it a healthy breakfast.

But when those same blueberries are added to oatmeal or plain Greek yogurt with walnuts, they are part of a healthy breakfast. If the rest of the day’s food choices fall in line—lean proteins, fruits, vegetables, seafood, etc.—you’re likely to get some big benefits.

One of the biggest might be improved cognitive function, better memory, and a lower risk for dementia.

A recent study uncovered how food combinations played a role in preventing dementia, showing that it’s just not what you eat, but how you group, or “network,” food.

There is plenty of research showing how a Mediterranean or MIND style diet can protect memory and brain health. But this new research showed that food networks can play a varying role even where specific food choices do not.

Researchers used surveys from study participants to identify how food choices influence dementia risk. They found that although individual food choices didn’t vary greatly between participants, their “food networks” did.

When processed meats were a food “hub,” they were typically paired with starchy foods like potatoes, sugary snacks like cakes, and alcohol. As you might guess, people who commonly paired these items were more prone to dementia and cognitive decline.

On the other hand, people who had food networks more likely to include a diverse array of foods, including meat, vegetables, fruit, seafood, and other “healthy foods” were less likely to develop dementia.

It’s not that the people with better health outcomes fully avoided the same foods like the ones who developed dementia, or vice versa, but overall network inclusion and diversity varied.

Overall eating patterns, therefore, seemed to be the determining factor in dementia risk, and something that is relatively simple to modify for most people.

To arrive at their results, researchers asked more than 600 people in France what they ate, then followed up over five years during medical checkups. 209 participants developed dementia by the time the follow-up period concluded.

Although individual foods have been identified to provide specific benefits, these benefits are typically only as strong as your overall diet.