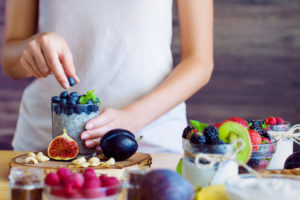 You’re likely aware that food choices play a major role in your health and risk for disease. But some risks can be hiding in your blind spot and you might never see them coming.

When it comes to eye health, you may have heard about certain antioxidants that can help prevent eye damage and conditions like age-related macular degeneration (AMD). Beta carotene, lutein, zeaxanthin, vitamin C, and vitamin A may come to mind.

But if those nutrients, found in colorful fruits and vegetables, can help protect your eyes, are their foods that can harm them?

A new study says there is.

AMD is the leading cause of blindness among the elderly and it can come in stages. Early stage AMD can be treated and progression can slow or stop. If left alone, it can progress to severe vision loss.

A recently published study found that food choices may have a major role in the progression of AMD.

Researchers from the University of Buffalo found that people who ate a lot of red meat, fried foods, refined grains, and high-fat dairy were three-times more likely to develop late-stage AMD.

Unsurprisingly, these are many of the same foods that are associated with other health conditions like heart disease, metabolic syndrome, and more. They are also fixtures of the Western, or Standard American, diet.

The researchers did not find an association between these foods and the development of early-onset AMD, suggesting these food choices may compound the effects of an existing problem. Perhaps after the initial diagnosis, dietary intervention may slow progression.

The team arrived at their conclusion by analyzing data from people taking part in the Atherosclerosis Risk in Communities (ARIC) study. The study lasted from 1987 to 1995 with an 18-year follow-up period.

If you’re concerned about eye health or have been diagnosed with AMD, limiting inflammatory foods may halt further degeneration.

Adopting a diet rich in antioxidant and nutrient-dense fruits, vegetables, and whole grains, while limiting processed red meat, may help you see further into the future.