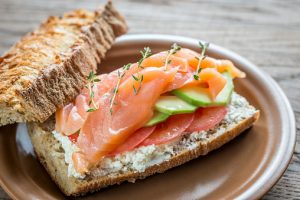 We all know that a fish based diet is good for the brain, but researchers have elevated the status of fish from ‘good’ to ‘great’ by proving that a diet high in fish can reduce the risk of depression, schizophrenia, Alzheimer’s disease and other mental disorders.

A research study done by a team from the Medical College of Qingdao University in China analyzed the potential impact of a steady diet of fish on a person’s risk of depression. The results of the study reveal a direct relationship between a high-fish diet and brain health in both men and women.

The details of the study are available in the Journal of Epidemiology & Community Health.

For the in-depth study, researchers used data from 26 studies published between 2001 and 2014. In order to get a fair analysis the researchers used a large sample size of 150,278 participants. The aim of the study was to determine how a person’s fish consumption related to rates of depression.

After detailed examination, the researchers found that of the 26 studies, 12 showed a significant association between depression and fish consumption.

This study comes close on the heels of another study which was published in Nature Communications. That study showed that the consumption of fish oil helped prevent the onset of schizophrenia in young people who were at risk for the serious psychiatric condition. For the study, the researchers divided 13- to 25-year-old participants (the ages when symptoms of schizophrenia first arise) into two groups. One group was given fish oil pills, and the other group was given placebos.

And in a third related study, a team of scientists from the University of California, San Francisco, studied the most common risk factors for developing Alzheimer’s disease. After examining 300 studies, the team narrowed the high risk to nine factors, one of which is unhealthy eating.  The research team went a step further and identified a diet rich in fatty-fish that are full of omega-3s (anchovies, salmon and sardines) as good for brain health.

The researchers are still not sure whether many benefits of eating fish come from the omega-3s or the high quality protein, vitamins and minerals the fish provides. But one thing is for certain – a high-fish diet is linked to lower risk of depression. And so, eating more fish may help prevent depression. The team hopes future studies will be done to determine if the high-fish diet and depression association varies with different types of fish.