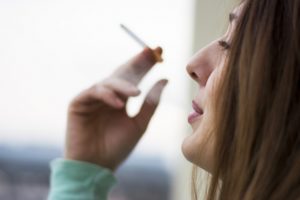 Fibrosis in heart and kidneys increases with smoking, according to research findings. In addition, smoking can worsen already existing kidney disease. Fibrosis, which is scarring of organ tissue, can negatively impact the function of the affected organ.

The researchers conducted their study on two groups of rats: One with normal kidney function and the other with chronic kidney disease. Both groups were exposed to cigarette smoke five days a week for four weeks and compared to two control groups who were not exposed to smoke.

The incidence of the risk factors for heart disease increased among the rats that were exposed to smoke. These included blood pressure, enlargement of the heart, and development of scar tissue in the heart muscle. There was also greater fibrosis present in the kidneys.

The researchers examined genetic material of the organ tissue and found that expression of the anti-fibrotic microRNA was significantly decreased in the smoke groups, compared to the control groups.

The authors concluded, “This is a significant and novel finding illustrating the effects of tobacco and nicotine on epigenetic regulation of fibrosis formation in cardiac and renal tissues.”


Smoking and the kidneys

Smoking is a bad habit to keep and can lead to early mortality as it negatively affects every part of the body. Your kidneys, in particular, are susceptible to the negative effects of smoking.

Smoking can increase blood pressure and heart rate, reduce blood flow to the kidneys, increase production of angiotensin II, which is produced by the kidneys, narrow the blood vessels to the kidneys, damage arterioles, promote arteriosclerosis of the kidney arteries, and accelerate kidney function loss.

Smoking also allows for other toxins to enter the body and has been linked to proteinuria and kidney disease progression.

As you can see, the negative impact of smoking on kidneys is immense, on top of the fact that it harms your overall health, so it is in your best interest to quit.