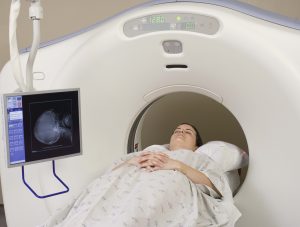 Lead author Dr. Marco Loggia said, “In patients with fibromyalgia, there is an alteration in the central nervous system pain processing and a poor response to topical pain treatments, trigger point injections, and opioids. Our study examines the disruption of brain function involved in the individual experience of pain anticipation and pain relief.”

The study enrolled 31 patients with fibromyalgia and 14 healthy controls. MRI scans and cuff pressure pain stimuli on the leg were performed on all participants. During the MRI, participants received visual cues alerting them of impending pain onset (pain anticipation) and pain offset (relief anticipation).

The researchers found that during pain anticipation and relief, fibromyalgia patients displayed less vigorous response in the brain regions involved in sensory, affective, cognitive, and pain-regulating processes. The ventral tegmental area (VTA) displayed activity during pain anticipation and stimulation, but was deactivated in healthy controls during anticipation of relief. In fibromyalgia, the VTA response during periods of pain was significantly reduced or inhibited.

Dr. Loggia concluded, “Our findings suggest that fibromyalgia patients exhibit altered brain responses to punishing and rewarding events, such as expectancy of pain and relief of pain. These observations may contribute to explain the heightened sensitivity to pain, as well as the lack of effectiveness of pain medications such as opioids, observed in these patients. Future studies should further investigate the neurochemical basis underlying these dysfunctions.”

Researchers presented findings suggesting fibromyalgia pain may be caused by abnormal pain signal processing in the brain. This abnormal brain processing also may be related to lack of response to opioid therapies. Lead investigator Richard E. Harris said, “Although we have known for some time that the brain is a key player in the pathology of fibromyalgia, we have yet to understand how pain regulation is disrupted in this condition.”

Using MRI scans, the study examined the blood flow to the brain in 18 participants after painful stimuli. The data was collected before and after acupuncture and sham acupuncture, which was used to reduce pain. The association between the brain’s response to pain and the binding of μ-opioid receptors was then examined.

There was a strong negative correlation between the brain’s response to pain and the binding availability of μ-opioid receptors. A positive correlation was observed in a classic pain prevention area, and these associations were related to reported pain sensations.