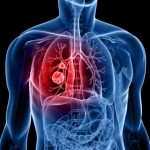 The U.S. Food and Drug Administration (FDA) approved the drug Iressa as a first-line treatment for patients suffering with a type of metastatic lung cancer called non-small cell lung cancer (NSCLC) this week.

NSCLC is the most common cause of lung cancer according to the National Cancer Institute.

“This approval provides further support for a highly targeted approach to treating cancer,” said Richard Pazdur, director of the Office of Hematology and Oncology Products in the FDA’s Center for Drug Evaluation and Research.

To prove the efficacy and safety of Iressa, the research team used a clinical trial of 106 patients. The participants had not been treated previously and had NSCLC and the mutation present. Researchers wanted to know what percentage of patients would see the tumors shrink or disappear completely after using the drug.

The participants were given the drug once a day. Results showed that tumors shrank in about 50 percent of patients after treatment and lasted an average of six months.

Iressa was originally approved by the FDA in 2003 for the treatment of patients with advanced NSCLC, but it was voluntarily withdrawn from the market after subsequent trials failed to confirm the clinical benefit.