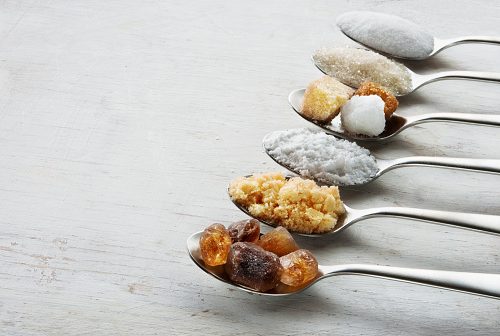 Fatty liver disease may be treated with natural sugar, and new potential treatment targets have been discovered. Non-alcoholic fatty liver disease (NAFLD) is associated with obesity and sugar consumption. There is currently no effective treatment to combat the condition except to lose weight to decrease fat accumulation in the liver.

While studying mice, researchers found that a natural sugar trehalose can prevent sugar fructose from entering the liver. It helps clean up excess fat of the liver.

First author Dr. Brian J. DeBosch, said “In general, if you feed a mouse a high-sugar diet, it gets a fatty liver. We found that if you feed a mouse a diet high in fructose plus provide drinking water that contains three percent trehalose, you completely block the development of a fatty liver. Those mice also had lower body weights at the end of the study and lower levels of circulating cholesterol, fatty acids, and triglycerides.”

NAFLD occurs when fructose becomes stored in the liver, and thus fat develops, which over time becomes toxic and harms the liver to the point where a transplant is needed.

Trehalose is a natural sugar found in plants and insects and is approved by the FDA for human consumption. DeBosh cautions that it may take some time before clinical testing can take place in humans with non-alcoholic fatty liver disease to determine the effectiveness of trehalose. DeBosch explained, “I can’t recommend it to my patients yet. We know the mice that received drinking water with three percent trehalose lost weight, and we suspect that weight loss was due to loss of fat, but we can’t be certain that’s the only effect. We need more studies to make sure they were not losing bone or muscle mass.” In the meantime, DeBosch recommends that patients cut back on their fructose intake, especially high-fructose corn syrup, which is found in many processed goods.

During their study, the researchers found that trehalose blocks the transport of energy in the form of sugar into liver cells, causing them to act as if they are starving. When a cell is starving, it begins to consume stored fat, but it can also consume protein, sugars, and other waste as well.

“We appear to be hijacking the liver’s own starvation pathway using a sugar already found in nature. We think autophagy may be triggered when the cell is stressed with too much fat or protein buildup. The cell turns on autophagy in response to the stress or because of a lack of energy and starts gobbling stuff up. It’s a house cleaning,” added DeBosch.

The potential for trehalose as a form of treatment, according to DeBosch, spans far beyond neurodegenerative and metabolic disorders. He concluded, “Autophagy plays numerous roles in the body, ranging from healthy development to involvement in cancer and autoimmunity. The hope is that by studying this ‘nutraceutical’ and its actions, we can uncover and then leverage its important cellular activities to halt or reverse disease.”

New potential targets for fatty liver disease have been discovered, as researchers found that two proteins – p38 gamma and p38 delta – that accumulate in NAFLD can be inhibited as a possible treatment method.

The researchers conducted their study on mice that were unable to express p38 gamma and p38 delta in neutrophils. The researchers point out that the arrival of both proteins is necessary for the accumulation of fat.

The researchers are hopeful that their findings could lead them towards prevention treatments by conducting liver biopsies on at-risk individuals and inhibiting p38 gamma and p38 delta.

The one thing putting your liver at risk (HINT: it’s not alcohol)