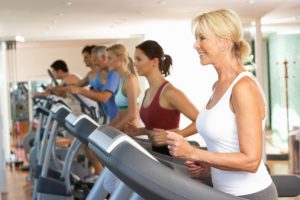 A new study has found that exercise temporarily suppresses appetite, showing that common fears that exercise increases hunger are but a mere myth. The findings come from two small studies in which one group of participants lowered their calorie intake by exercising and another group by cutting on their food consumption. While they burned the same number of calories, those who exercised ate one-third less at a buffet meal.

Study author David Stensel said, “Some researchers have claimed that women’s appetites, appetite hormones, and food intake are more likely to increase after exercise than men’s. Our new study shows that this is not the case — at least over the course of a single day. We have seen this previously in men, but were curious to see if women responded in the same way.”

In one of the studies, the researchers analyzed hormonal, psychological, and behavioral responses to calorie control through exercise and food restriction over the course of nine hours among 12 healthy women. Those who restricted their calories had an increase in the hunger hormone and lower levels of the hunger-suppressing hormone.
These women consumed 944 calories at a buffet meal, compared to 660 calories consumed by women who ran on a treadmill.

In an alternative study, 10 men and 10 women completed 60 minutes of running at the beginning of a seven-hour trial. Appetite perception and suppression were not found to differ among men or women.

Stensel found that appetite suppression was greatest during vigorous workouts. He added, “The take-home message is that exercise will not necessarily make you overeat or compensate by eating more food. There is a widespread perception that exercise will make you hungry and cause you to overeat. We have shown this is not necessarily the case, at least in the short term.”

“Our participants were young, fit, and healthy — most of them were university students. It is possible that individuals who are overweight will respond differently … [and] also possible that exercise will cause compensatory increases in food intake over the longer term — weeks and months.”

Additional research is needed to confirm the findings on a more general population level.