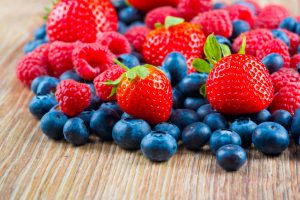 Eating strawberries and blueberries may help prevent age-related memory loss and heart attacks, according to research studies. Enjoying a serving or two of recognized brain foods on a daily basis could help to maintain brain health and mental performance.

Aging is commonly associated with the deterioration of various parts of our body, including the capacity of our brain to retain and process information. Alzheimer’s disease is the most recognized brain disorder that affects elderly adults, characterized by a progressive deterioration of cognitive functions of the brain.

In simple terms, Alzheimer’s disease is the gradual loss or degeneration of memory and mental functions, resulting in major changes in behavior and performance. This affects not only the elderly patient, but also rest of the family, especially when the patient reaches the stage of being unable to recognize their spouse and children or remember where they live.

According to a recent study published in the Journal of Alzheimer’s Disease, eating certain fruits resulted in an improvement in the mental performance of a group of study participants. The study consisted of approximately 447 elderly adults within the age range of 55 to 80 years. The study participants were also classified to possess at least three risks for developing cardiovascular disease, such as smoking status, family history of heart disease, hypertension, and high blood cholesterol levels. The mental health of the participants was also assessed at the start of the five-year study. The information on the type of food items consumed on a yearly basis was also collected through personal interviews.

The results of the study showed that those participants who consumed brain foods rich in polyphenols, which are plant-derived chemicals commonly found in berries, fruits, and nuts, had better memory outcomes at the end of the study period. These brain foods were described to enhance the brain performance, especially in remembering different types of information, such as names, dates, and other details of events they experienced.

In addition, these brain foods also helped in preventing damage to various tissues of the body, including the brain, thus resulting in the maintenance of memory. The overall performance of the participants who consumed more brain foods was also shown to be superior to those who preferred to consume meat-based diets.

Another method used by the researchers to determine the actual amount of brain foods consumed was checking the actual levels of polyphenols excreted in the urine. Polyphenols are eventually removed from the body through the urine, especially when conjugated with other molecules such as fatty acids and cholesterol. Polyphenols thus assist in removing molecules that may cause damage to the body, such as fats that could be deposited in the walls of blood vessels and nerve cells in the brain.

The research showed that bioactive compounds such as polyphenols could be naturally derived from berries, wine, and walnuts, serving as brain-health foods to support memory and cognitive functioning during aging. These brain foods may also enhance mental performance, thus decreasing memory loss and brain dysfunction.

Blueberries and strawberries are the most eaten berries in the U.S., and that is why they were included in the study.

During the study, 405 heart attacks occurred. Women who consumed the most blueberries and strawberries had a 32 percent reduction in heart attack risk, compared to those women who only consumed berries once a month or less.

Lead author Aedín Cassidy added, “We have shown that even at an early age, eating more of these fruits may reduce risk of a heart attack later in life.”

Why your diet could be blamed for failing memory