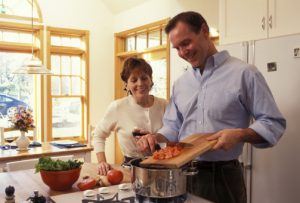 A recent study found that eating more homemade meals reduces the risk of type 2 diabetes. The findings were presented at the American Heart Association’s Scientific Sessions 2015. The study uncovered that those who ate two homemade meals (lunches or dinners) a day – 11 to 14 meals a week – had a 13 percent lower risk of developing type 2 diabetes. This was in comparison to those who had six or less meals at home a week. Type 2 diabetes has been shown to be a risk factor for heart disease.

The research was based only on lunch and dinner habits due to lack of data available. The data they did use came from 58,000 women and over 41,000 men who were followed for up to 36 years.

At the beginning of the study no one had diabetes, heart disease or cancer.

Geng Zong from Harvard T.H. Chan School of Public Health said, “The trend for eating commercially prepared meals in restaurants or as take-out in the United States has increased significantly over the last 50 years. At the same time, type 2 diabetes rates have also increased.”

Other research has shown eating out, especially at chain restaurants, is associated with poor diet quality and higher weight in children and young adults. In the current study, researchers were able to reveal that homemade meals were not only associated with a lower risk of type 2 diabetes, but lower weight as well. Being overweight is a risk factor for both type 2 diabetes and cardiovascular disease.

The researchers do not recommend a set number of meals that should be homemade, but Zong suggests the more the better.