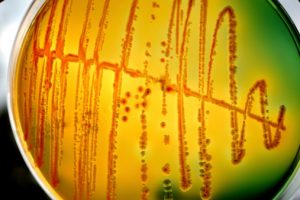 Researchers uncovered the reason why some people get sick, and even die, from E.coli O157:H7; the E.coli bacteria – a food borne pathogen – become more harmful when it is with beneficial bacteria.

The four year study used mice models that received pathogenic E. coli O157:H7 serotype with a nonpathogenic strain of the bacteria. Researchers found the mice became much sicker compared to mice who only received E.coli alone. The findings are relevant because multiple strains of E.coli are typically found within the intestines of humans.

Some strains of E.coli are harmless and are necessary within the digestive system. But other strains can lead to severe illness and even death.

Edward Dudley, associate professor of food science, said, “Within our intestines, each of us carries several hundred different types of bacteria, including E. coli, and E. coli comes in a large number of varieties. These range from organisms that just naturally colonize our intestines and provide us with benefits to organisms like the ones I focus on that have evolved to be very virulent. This research suggests that some strains of harmless E. coli in our intestines can interact with pathogenic E. coli in ways that will either increase or decrease how much toxin the pathogen produces. And that may dictate how sick one gets with an E.coli infection, or even if an infection proves to be fatal.”

The findings may bring doctors closer to better treating more dangerous strains of E.coli to prevent complications. But before the findings can be used on populations, additional research is required in order to determine which bacteria amplify the effects of E.coli O157:H7.

Dudley added, “One of the issues with this particular pathogen is that by the time people are infected, we can’t do much for them. We can’t use antibiotics because antibiotics make E.coli O157:H7 more virulent – the only treatment is just to monitor the individual and make sure he or she doesn’t become dehydrated and be sure the kidneys stay functional.”

Lead researcher, Kakolie Goswami, said, “These findings create a compelling argument to reconsider the appropriateness of assessing the virulence potential of E. coli O157:H7 strains solely by quantifying Shiga toxin production in pure cultures, because there are many strains of otherwise harmless E. coli present in the human intestine that have the potential to enhance Shiga toxin production. More research on the interactions between E. coli O157:H7 and the plethora of bacterial species present in the intestine is needed to appreciate how the gut microbiome affects virulence of this foodborne pathogen.”

Future study focus on how pathogenic and non-pathogenic organisms communicate with each other, and what can modern medicine do to shorten the duration of the disease.

The findings were published in Infections and Immunity.