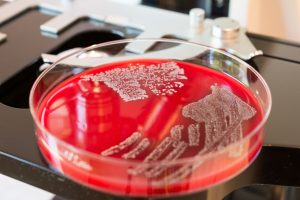 During Crohn’s disease, ulcerative colitis, and other inflammatory bowel diseases (IBD), harmless E.coli bacteria in the gut can become harmful. Within the gut, there is a variety of bacteria, including E.coli, which normally is non-threatening, but can become so in IBD patients. When E.coli in IBD patients becomes harmful, it can trigger flare-ups and contribute to further worsening of the disease.

Matam Vijay-Kumar, assistant professor of nutritional sciences and medicine at Penn State, said, “Several types of inflammatory bowel disease are characterized by expansion of the opportunistic E. coli in the gut. However, the mechanisms, by which E. coli can thwart the hostile host innate immune system, are poorly understood. Identifying these mechanisms will help to reduce the E. coli burden in the inflamed gut and prevent chronic extra-intestinal diseases.”

Researchers studied the interactions between enterobactin (ENT), myeloperoxidase (MPO), and lipocalin 2 (Lcn2), and how they can regulate E.coli within the intestines.

ENT takes iron from host proteins and can help spread E.coli. MPO typically helps white blood cells fight off bacteria, but ENT prevents it from doing so, and Lcn2 helps gather up ENT, preventing it from obtaining iron it needs to survive.

Vijay-Kumar added, “These bacteria can be harmful under special circumstances, such as IBD. Most E. coli express enterobactin, a siderophore, and to avoid its recognition by the host lipocalin 2, they have the flexibility to express stealth siderophores. Strictly speaking, chelation of iron in the gut by enterobactin and inhibition of host MPO at the same time is positive for E. coli and negative for the host.”

The study helped researchers identify a new defense mechanism used by E.coli. Vijay-Kumar explained, “We have to find a way to identify the drugs, which can inhibit or degrade secreted enterobactin. Alternatively, since MPO is known to be pro-inflammatory, not only in IBD but also in other inflammatory diseases, it may be possible to develop enterobactin-based drugs to alleviate inflammatory pathways.”

Inflammatory bowel diseases are often autoimmune diseases as well, where the immune system begins to attack healthy bacteria in error. This process allows for bad bacteria to thrive and grow, which leads to inflammation and damage of the intestines, along with a slew of discomforting symptoms.

Lead author Andreas Baumler said, “Much like humans use oxygen, E. coli can use nitrate as a replacement for oxygen to respire, produce energy and grow. In IBD, nitrate produced by inflammation in the gut allows E. coli to take a deep ‘breath,’ and beat out our beneficial microbes in the competition for nutrients.”

Intestinal inflammation releases nitric oxide radicals, which are effective at destroying bacteria, but are also unstable, which causes them to decompose into nitrate. E.coli then uses the nitrate as a means to grow and spread.

In order to develop new treatment options, researchers must understand why E.coli likes to push out good bacteria. Current treatment options suppress the immune system, but their effectiveness can decrease over time.

The researchers suggest, improved treatment can be done by targeting molecular pathways that produce nitric oxide and nitrate, along with other molecules that feed bacteria. These changes can help calm the gut.

Baumler concluded, “The idea would be to inhibit all pathways that produce molecules that can be used by bacteria such as E. coli for respiration and growth. Essentially, you could then smother the bacteria.”

Inflammatory bowel disease (IBD) and irritable bowel syndrome (IBS) may share symptoms, but are not the same
Crohn’s disease and ulcerative colitis relapse may be triggered by sleep disturbances