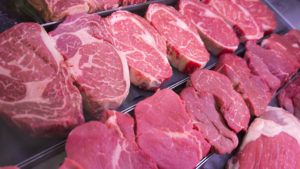 Red meat remains controversial. For a long time, it was viewed as a significant source of saturated fat that contributes to high cholesterol. Identified as a potential threat to heart health, it came under fire from several health experts.

Opinions have changed more recently. Growing data indicates red meat derived cholesterol is neutral in the body, meaning it does not collect on arterial walls. That said, evidence remains that high red meat intake is associated with a higher risk for heart disease.

According to a recent study published in Hypertension, a journal by the American Heart Association, red meat’s influence on arterial health might have to do with gut bacteria.

Trimethylamine is then converted to Trimethylamine-N-Oxide (TMAO) and introduced into the bloodstream. Researchers believe this bacterial byproduct leads to arterial oxidation, or arterial aging, to increase the risk of heart attack or stroke.

Older work has shown that people with high levels of TMAO are more than twice as likely to have a heart attack or stroke than those with the lowest levels. Although everybody has TMAO circulating in their bloodstream, a diet high in red meat could significantly enhance its effects.

In this new study, researchers looked at TMAO in humans and mice. First, they looked at 101 older adults and 22 young adults, concluding that TMAO levels rise with age. They also found that adults with higher levels of TMAO had significantly worse artery function.

Next, they fed TMAO directly to mice for several months. They noticed swift and significant aging in the arteries, so much so that 12-month-old mice (comparable to a 35-year-old human) looked more like 27-month-old mice (80 in human years).

Eating more red meat, especially throughout your life, could lead to increased production of TMAO and lead to faster and more severe degradation of your arteries. Limiting intake to once per week or so is recommended.

It’s also possible there are compounds that can work against TMAO, particularly dimethyl butanol. Dimethyl butanol may prevent the production of TMAO and can be found in olive oil, red wine, and vinegar.