Home » Health News » Do This One Thing for a Healthy Heart 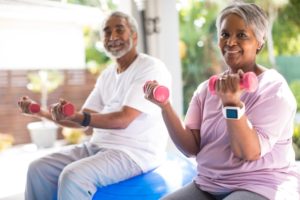 New research findings suggest that if you want to reduce your risk of heart attack or stroke, it only takes an hour or less of weightlifting a week.

The study looked at over 12,600 adults for over a decade. The researchers found that small amounts of resistance exercise weekly was associated with a 40 to 70 percent reduction in a cardiovascular event.

An important note is that that additional weightlifting did not reduce the risk of a cardiovascular event further.

Weightlifting uses muscle resistance to help strengthen and build muscles. Other types of resistance training include push-ups, sit-ups, and lunges.

Study author Duck-Chul Lee explained, “Traditionally, weightlifting was for athletes, and that’s why I think there is less evidence on its health benefits, specifically for the heart. People know that running or cardio exercise is good for the cardiovascular system, but there are benefits of weightlifting on the heart that were not [previously] well-studied.”

In an alternative study, Dr. Lee and his team found that less than an hour of weightlifting a week could help reduce cholesterol and reduce the risk of metabolic syndrome, which can increase the risk of illness and disease such as diabetes.

For the study, compared to those who did not complete weightlifting exercises, those who did (one to three times a week for 59 mins or less) experienced up to a 70 percent reduction in risk for a cardiovascular event.

Lee added, “We found benefits of resistance exercise without body mass index [changes]. It means that even though you don’t lose weight, you can still get benefits for the heart. People believe the benefits of exercise are from losing weight, but that’s not true.”

Physical activity is often recommended to maintain a healthy heart, so these findings aren’t entirely shocking. The point is that a little bit of exercise can go a long way in improving your heart health.