Home » Health News » Discovery in COPD could help with treatment 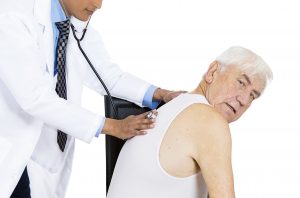 A new discovery in COPD could help improve treatment outcomes, according to the research. In a recent study, the researchers uncovered a new way to predict the progression of chronic obstructive pulmonary disease (COPD). The findings could help doctors detect which patients will not respond well to treatment and which are at a higher risk of disease advancement.

The researchers found that formation of the neutrophil extracellular traps (NETs) – a behavior of neutrophils – in the lungs of COPD patients reduces neutrophils’ ability to kill off harmful bacteria.


Study author Dr. James Chalmers said, “We have known for many years that neutrophils should be able to fight infection, but we haven’t fully understood why they don’t work in COPD. Some recent studies described the presence of NETs in the COPD lung, so we wanted to know whether there was any relationship between NETs and outcomes in COPD patients.”

The researchers took blood and sputum samples from 141 patients at the end of an acute COPD attack. Researchers found that NET was directly related to the severity of COPD and the risk of flare-ups that didn’t respond well to corticosteroid treatments.

Chalmers explained, “This marker may help us identify patients at higher risk of disease progression. And it identifies a subset of patients who may need treatments other than corticosteroids. Our data show that inhaled steroids may even exacerbate NETs, so we need to identify new COPD treatments and discover whether inhibiting NET formation will result in improved clinical outcomes for patients with COPD.”

“While our new research is at an early stage, we hope that detecting NETs may be a biomarker that can identify patients at risk of deterioration, and that we can work toward testing whether inhibiting NET formation would be a beneficial treatment in COPD,” Chalmers concluded.