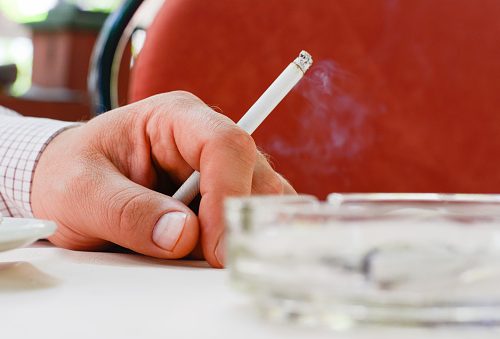 Smoking is the primary cause of lung cancer, but lung cancer can be seen in non-smokers as well. Researchers in Portugal wanted to uncover the differences between lung cancer in smokers and non-smokers.

For the study 504 non-smokers and smokers from Portugal with non-small cell lung cancer (NSCLC) were examined. Non-smokers with lung cancer were found to be mostly “women with adenocarcinoma, with less chronic obstructive pulmonary disease (COPD), heart disease, previous cancer of the larynx and weight loss.” Non-smokers also had a longer survival rate in comparison to smokers (51 months vs. 35 months).

Dr Cátia Saraiva, lead researcher, said, “In Portugal, information on the differences in the risk and survival between smokers and non-smokers with NSCLC, has been very limited up to now. Because lung cancer represents a set of tumors with confounding and sometimes misleading symptoms in both smokers and non-smokers, we felt that it was of particular importance to acquire this knowledge. We believe that the differences we found between the two groups will help improve diagnosis, and prompt investigators to try to find out why these differences occur.”

Dr. Saraiva then added, “In the non-smoking group, we found professional exposure to carcinogens in nine percent, a family history of lung cancer in five percent, and a previous cancer diagnosis in six percent. Additionally, 18 percent had high blood pressure.”

Non-smokers were more likely to be diagnosed with an advanced stage of lung cancer, where it had spread to other parts of the body. “It seems plausible that the non-smoking Portuguese population is not aware of lung cancer risks. But we need to confirm our results through population-based studies, before public education issues can be addressed,” said Dr. Saraiva.

The findings were presented at the European Respiratory Society’s International Congress 2015 (September 27, 2015).