Home » Health News » Did You Smoke? Here’s How Long It Takes Your Heart to Recover 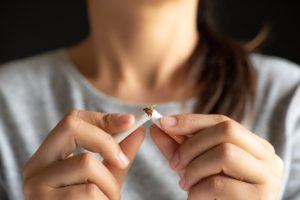 About three years ago my dad got rather anxious. He’d quit smoking roughly 35 years prior, and his doctor told him it would take about that amount of time to learn what kind of an effect decades of inhaling thick smoke would have on his health. The anniversary has passed, plus a few years, and everything seems good so far.

Quitting smoking is not easy, as I’m sure you might know. But one thing is for certain: almost instantly after taking your last puff, your heart and lungs start to recover. Quitting is truly one of the best things you can do for your cardiovascular system.

A new study is showing that even heavy smokers—like my father was decades ago—can restore heart health to the point where it’s like they never smoked at all. The report, published in the Journal of the American Medical Association, shows that heavy smokers can potentially restore full health to their cardiovascular system in 10-15 years. After that break, the risk of a cardiovascular event is identical to someone who’s never lit up.

Before this study, the general consensus among doctors was that it only took about five years. But that was for people who smoked less, meaning under a pack a day. Either way, after five years smoke-free, your heart will still be significantly healthier than had you never stopped. And if you were told half a lifetime ago it would take the second half of your life to learn the damage, you may be able to breathe a deep sigh of relief!

From the standpoint of heart health, it is never too late to stop smoking. You will notice the benefits instantly. And you can enhance those benefits by making other changes to strengthen all the actors in your cardiovascular system: heart, arteries, lungs, and veins. Eating antioxidant-rich foods like cherries and beets can help relax and strengthen veins, while exercise can help make your heart, lungs, and arteries more efficient.

If you’ve quit smoking, know that you’re on the road to recovery—or have perhaps reached it. But don’t stop there: adopt other healthful habits to support your heart and increase longevity.