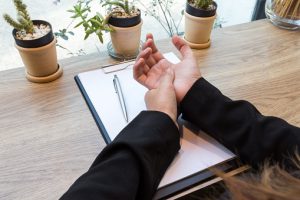 Depression symptoms have been associated with an increased risk of arthritis and arthrosis.

When it comes to depression, there are many different kinds. Seasonal affective disorder, or SAD, occurs mainly through the winter months. Postpartum depression affects new mothers, and major depressive disorder is depression lasting more than two weeks, where a person feels hopeless, sad, has lack of interest in life, and where it impacts mental and physical health.

These are just some of the forms of depression out there, but there are many more. Results from the 2012 National Survey on Drug Use and Health: Mental Health Findings revealed an estimated 43.7 million American adults had any mental illness (AMI). Furthermore, an estimated 16 million American adults reported major depressive episode (MDE). These numbers just go to show that depression and mental illness affect a large amount of the population – and so learning more about it is important to improving it.

Even though we know some of the causes and symptoms of depression, a new study has revealed a very serious side effect of depression: joint disease. As we age, we can be more prone to joint disease, such as arthritis, but researchers have now shown a link between depression and arthritis that we may not have known before.


Depression sufferers may have an increased risk for arthrosis and arthritis

Published in the Frontiers of Public Health Journal, researchers from the University of Basel in Switzerland examined data from 14,348 people living in Switzerland.

By examining the data, the researchers uncovered that those suffering from depressive symptoms were more likely to develop a physical disease, such as arthrosis and arthritis. Both these joint diseases cause inflammation and are degenerative for the joints. But how does mental illness affect the physical body?

Although further research is required, researchers suggest that because depression takes a toll on the ability to want to perform physical activity, the lack of movement leads to joint diseases like arthritis. Other speculations are that those with a joint disease who can’t perform functions they once could fall into a depressive state. Because arthrosis and arthritis are caused by inflammation, and some depressive disorders, too, result from inflammation, the two work hand in hand.

Treating depression and joint disease together

Although the link between depression and arthritis isn’t as clear yet, treating both is ideal. Current treatments for depression involve medications, but therapy is also an effective means as well. Eating mood-boosting foods that contain omega-3s are also positive ways to treat depression.

Other natural interventions for depression are support groups and exercise. Regular exercise not only releases positive-feeling hormones, but it can also help keep your joints working properly. But if you’re not up to exercising because of the joint pain, starting off slow and working your way up, with your doctor’s advice and approval, is your safest bet to treating arthritis. Avoid activities like running and instead opt for biking or swimming, which put your joints through less stress.

If you’re noticing a change in your mental state, feel detached, hopeless, and sad, you may be going through depression and seeking help is your best defense to recovery. As the world becomes more aware of depression, we are fighting the stigma that once surrounded it. There’s no need to feel embarrassed to ask for help. These new findings also can help to save your joints.