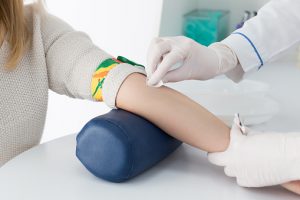 During the early stages of schizophrenia and depression, doctors often have a difficult time distinguishing between the two mental health disorders. The good news is that doctors may now be steps closer to be diagnosing depression and schizophrenia with the use of a blood test.

Coauthor of the study Dr. Handan Gunduz-Bruce explained, “This is the first objective, physiological marker for two major psychiatric disorders that, once fully developed into a clinical test, can allow for earlier and more accurate diagnosis, and selection of more appropriate medications for patients.”

Dr. Scott Krakower, assistant chief of psychiatry at Zucker Hillside Hospital, added, “It can be very difficult to diagnose depression and schizophrenia, especially when they onset in the adolescent years. Symptoms may not be as clear and the patient may not exhibit all symptoms of the disease.” The benefits of an early diagnosis “may help us one day quickly diagnose complex cases and offer earlier intervention for our patients,” added Dr. Krakower.

The researchers explain that in animal studies the release of a hormone arginine-vasopressin (AVP) relies on a cellular signaling process known as NMDA receptor signaling. NMDA receptor signaling appears to be higher in those with depression, but lower in those with schizophrenia.
For the study, the researchers administered a concentrated salt solution which activated the release of AVP. The patients’ blood was then tested for AVP levels, which were found to be higher in depressed patients, than in schizophrenia patients.

Being able to diagnose depression and schizophrenia early on can help doctors begin treatment sooner. Unfortunately, this diagnostic blood test is still in the works, so it may take some time until it is used in a clinical setting.

Related: Stroke risk may be predicted with a blood test